Debra is Floyd Hebert's fiancée. She is a lawyer who frequently travels abroad and thus, has a rather strained relationship with Floyd. She also appears to be cheating on him with an associate named Bob.

“I'm not afraid to use this... I'm not. Bob taught me!”
— Debra pulling a gun on Trevor and Floyd

Her apartment is later inhabited by Floyd's cousin, Wade, and his friend, Trevor Philips, who both trash the apartment, much to Floyd's chagrin.

When Debra meets Trevor, she tries to make him leave, but then she gets angrier and threatens both him and Floyd with a Pistol. Floyd becomes angry and begins waving a Knife around. The screen fades to black and after an indeterminate period, Trevor leaves the condo covered in blood.

A Weazel News report heard on the radio states that a man was found shot in the head and a woman stabbed to death.

Debra in the original version of Grand Theft Auto V. 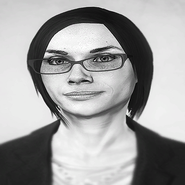