GTA Wiki
Register
Don't have an account?
Sign In
Advertisement
in: Missions, Missions in GTA V, Strangers and Freaks Missions, Side Missions
English

In-game time
“Were you a fan of Frank Mathers?”
— Abigail Mathers to Michael

Death at Sea is a Strangers and Freaks side mission in Grand Theft Auto V.

Abigail is found at the Sonar Collections Dock when playing as Michael De Santa after purchasing the dock. Abigail speaks about her husband Frank Mathers and his death in a submarine accident. The insurance company believes that the submarine was tampered with and is unwilling to pay Abigail. She asks Michael if he would find the missing Submarine Parts in order to prove to the insurance company that there was no foul play. Abigail gives Michael a Dinghy with sonar in order to find the missing Submarine Parts. The parts can be found by any character after the mission has been started by Michael. Once the player finds all 30 submarine parts, the mission What Lies Beneath automatically begins. 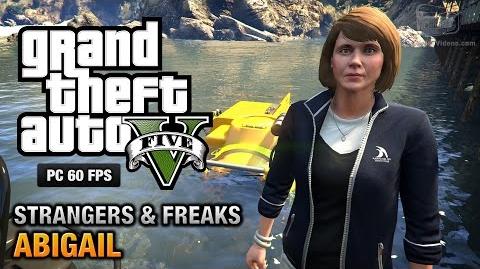