12
“So, Roger's Scrapyard - you know that joint. The Ballas are conversating with some professional type dudes out that way on topic of uncut product. You gonna get hold of the package, and bringing it back to my joint. I'll break you off something, and we go about out day like nothing's gone down. Straight?”
— Description

Death Metal is a mission in Grand Theft Auto Online given to the player by Gerald. It is available for up to 4 players.

The team needs to take a package of cocaine by ambushing a drug deal between the Ballas and an unnamed crew. The package is in the Rogers Salvage and Scrap Yard, with several Ballas protecting it from being stolen. Once the team kills all the Ballas, they need to get the package back to Gerald's apartment. 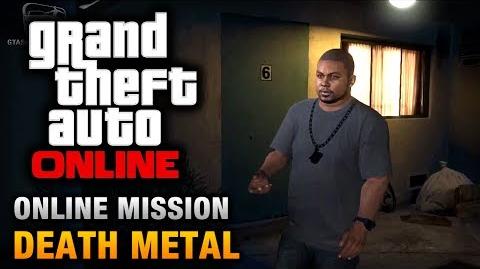