In-game time
“In his foolishness, an old associate of mine is preparing to testify against me, I want him gone, and I want proof of his departure - a photograph. He's barricaded in his mansion surrounded by bodyguards and police so you'll have to use your mind. Parachute in, fly or, I don't know, anything.”
— Description

Death From Above is a mission in Grand Theft Auto Online given to the player by Martin Madrazo. It is available for up to 4 players.

The player gets a message from Martin informing him of a possible witness he needs taken out. The player is then tasked with assassinating the witness and documenting it via cellphone photograph. They must travel to the marked mansion in Vinewood Hills, not far from Madrazo's house. Once there, they must kill the guards, neutralize the target and take a picture of the body with their phone. Then, they must lose any wanted level and return to Madrazo. 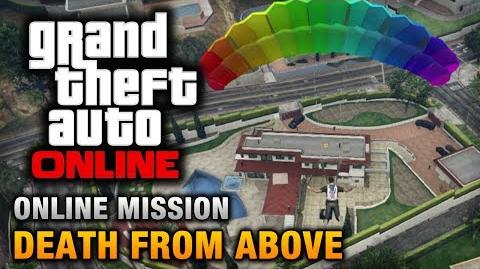