View source
watch 02:34
Fire Emblem Warriors: Three Hopes - The Loop
Do you like this video?
Play Sound
For other uses, see Deal Breaker.

“Alright, so today you gonna stick up some cats up for they stash, if you down. It's some across the lines thing between the Ballas and the Vagos at the Los Santos State Gas Company yard in Banning. Get over there, interrupt it, and get the package. Bring it back to me, I'll break off some change, we pretend like nothing happened. That's the lick. You good? ”
— Gerald's description

Deal Breaker is a mission in Grand Theft Auto Online given to the player by Gerald. It is available up to 4 players.

The Ballas and the Vagos are having a drug meeting between The Los Santos State Gas Company and Walker & Sons Warehouse off Dutch London Street in Banning. Gerald is interested and wants the team to head to the meeting, kill all the members and get the coke to his apartment. Once all the gangsters are dead and one of the team members collected the stuff, more Ballas and Vagos will come in Cavalcades, Ballers or Rancher XLs and the player needs to kill or escape from them all. When done, the player needs to simply get the coke back to Gerald's apartment. 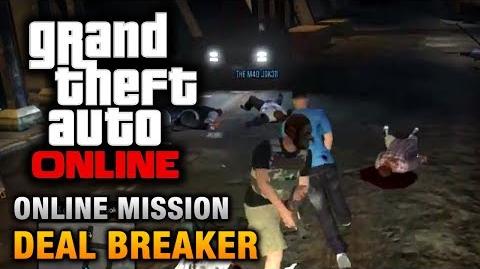