In-game time
“Turn the streets of Los Santos into a stylish electronic videogame battle to the death with the latest update to GTA Online. Achieve hyper speed on the futuristic Nagasaki Shotaro and demolish foes with the power of your light trail in the new Adversary Mode, Deadline.”

Deadline[1] is an Adversary Mode featured in Grand Theft Auto Online as part of the continuation of the Bikers update, released on November 8, 2016, during the Shotaro Week.

“Deadline pits up to four players against another, each mounted on a different colored Shotaro, which emits a temporary light trail as you ride through the arena. Any competitor unfortunate enough to come in contact with said trail meets an instant explosion. Make calculated movements to force opponents to cross your trail’s path and take advantage of strategic power-ups for a competitive edge; use Boost to speed ahead and cut off your opponents, slow down time with Zoned for precision movement, or leap your opponent’s light trail with Hop.”

Up to four players are set on differently colored Shotaros over a large floating platform as the arena, in what is essentially the 3D version of Don't Cross the Line. The objective of the game is to take out the rival players by using the bike's energy trail to block their paths. Any player that touches the rival bike's trail will instantly explode, losing one of their lives, the number of which can be set by the host.

The bikes are scripted to not stop completely, only to a minimum speed that is considered acceptable. If the player dies, but still has lives, they will respawn with a few seconds of invincibility. If the player falls out of the arena, they will also lose a life. Touching their own energy trail or crashing into an obstacle to stop the bike completely also makes the bike explode. The player's bike will explode only if it touches an enemy energy train, not if they collide with the rival's bike.

Once the player loses all their lives, they no longer respawn on the arena and are automatically the loser of the match once it ends, while the remaining player is considered the winner. If the time runs out, the winner is the player who has the most remaining lives of the match. If there is no way to tell the winner, a sudden death round will be activated. In this phase, participants must stay within an area called Sudden Death Zone, represented by a dome (similar to Penned In); if a player leaves the area, they will be eliminated.

Taking part in one round of Deadline unlocks the decommissioned Shotaro for purchase on Legendary Motorsport and the outfits in any clothing store, whether the player wins or loses.

Players have three different power-ups, which are placed randomly in the arena and can be picked up; they can give an advantage during the match if used correctly. The power-ups are: 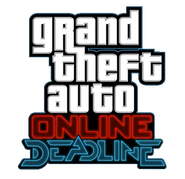