Dead Skunk in the Trunk

Dead Skunk In The Trunk

In-game time
“Alright, there's a car stuffed with a stiff at the cafe near Callahan Point. One of the Forellis thought he was a wise guy, so he got what he had coming to him. Take the corpse to the crusher in Harwood, alright?”
— Joey Leone

Dead Skunk in the Trunk is a mission in Grand Theft Auto III given to Claude by Joey Leone from his garage in Trenton, Portland, Liberty City.

Claude drops by Joey's auto shop, as previously instructed by Joey Leone. Joey wants Claude to dispose of a Forelli gang member's corpse, which is in the trunk of a Manana at Greasy Joe's Café in Callahan Point.

Upon entry into the car, Claude is ambushed by the Forelli Brothers in two Sentinel cars (one in the Cafe's parking lot, and another across the road to the south). With the two cars in pursuit, the player must successfully bring the Manana to Harwood and have it crushed, body and evidence, at the crusher in the Harwood Autocrusher and Junkyard.

Alternatively, the player may destroy the Forellis' cars before entering the Manana, provided they have the firepower to do so as they both turn hostile the moment they are attacked or if the player tries to open their car doors. Doing so will make the drive to the Harwood crusher far easier.

The corpse-carrying Manana can be taken back to the player's safehouse and blown up in the garage. While this will fail the mission, after the garage closes and re-opens, this unique Manana can be saved and kept.

The reward for completing the mission is $10,000. A bonus of $5,000 is awarded immediately for each Forelli car destroyed, and it is possible to keep failing and repeating this mission, to go after the Forellis and continually accumulate these bonuses. The mission The Getaway is also unlocked. 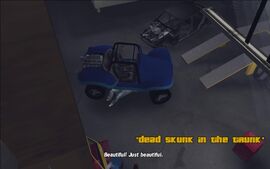 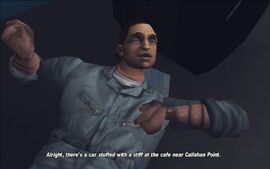 Joey explains to Claude that there is a car stuffed with a dead body of a Forelli Crime Family member in the trunk in Callahan Point, at the Greasy Joe's. 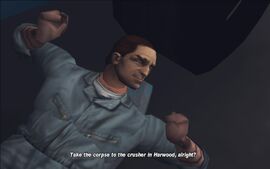 Joey instructs Claude to take the car and crush it with the car crusher in Harwood. 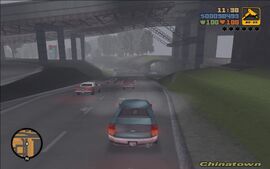 Claude on his way to Greasy Joe's to pick up the car. 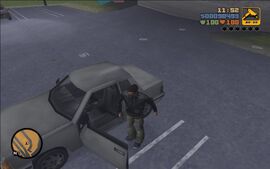 Claude getting into the Manana. 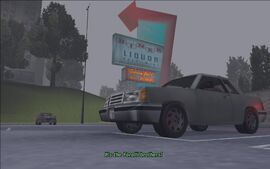 Shortly after Claude gets into the car, Forelli mobsters try to ambush him. 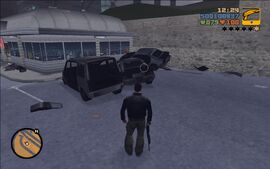 Claude, shortly after dealing with the two Forelli mobster cars. 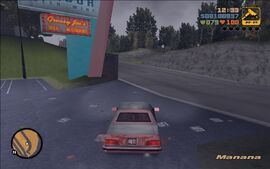 Claude driving with the Manana to Harwood, as instructed by Joey. 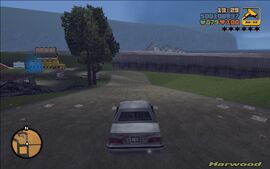 Claude arriving at the crusher in Harwood. 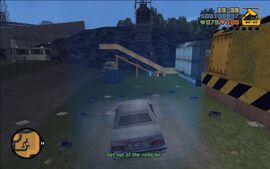 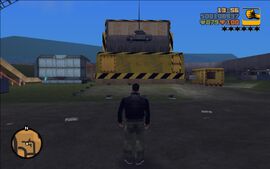 The car, along with the Forelli mafioso's dead body getting crushed. 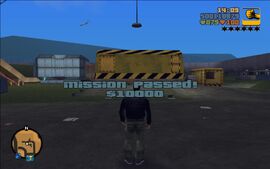 The car guarded by Forelli's

Claude driving a Manana which contains a Forelli Family corpse

Arriving at the Harwood Autocrusher and Junkyard

The car being lifted by the crusher 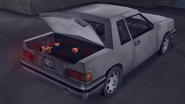 The corpse of one of the Forelli brother's with the trunk open.