GTA Wiki
Register
Don't have an account?
Sign In
Advertisement
in: Safehouses, Safehouses in GTA V, Locations,
and 4 more
English

The De Santa Residence is a safehouse in Grand Theft Auto V.

The mansion is located in Rockford Hills, an affluent residential neighborhood in Los Santos, San Andreas. It is bordered by West Eclipse Boulevard, Portola Drive, Edwood Way and Rockford Drive. The house first appears in the mission given to Franklin Clinton by Simeon Yetarian, Complications.

This is Michael's primary residence. The house was given to Michael after making an "off-the books" deal with FIB agent Dave Norton in 2004. The house is built in the Spanish Renaissance style, a style that is very popular in Beverly Hills.

The property contains a pool, hot-tub, and tennis court, where Michael can play tennis against his wife. Attached to the house is a two-car garage. The interior is made up of three bedrooms and two bathrooms upstairs; however, the bathroom across from Tracey's bedroom is inaccessible to the player. There is also a large living room, kitchen, and doors to garage/outside downstairs. There is a skylight above the stairs inside the house that, oddly, cannot be seen from the outside. The living room contains a blue yoga ball that can be moved around.

Regardless of which protagonist the player is playing as (Michael, Franklin or Trevor) at the moment, the gate will open for the protagonist. If Trevor or Franklin fires a weapon or rockets at Michael's mansion, Michael will usually call or text them and angrily tell them to stop shooting/firing rockets at his house. This can also happen on other safehouses by getting a call from Franklin or Trevor. While inside the mansion, Michael will be unable to use weapons, except when wanted by the police.

Whenever Michael enters the house, he will shout a variety of random lines saying he is home. A quote often used when he enters the house is "Honey I'm home!", or "Hey, big daddy's home as if anyone gives a shit." and many more. During the period when the house is empty, Michael will ask if anyone is home, or simply remark that he'll "never get used to the silence". After completing Reuniting the Family, the comments tend to be more optimistic, and he might remark "Big daddy, in the house!", "Daddy's back, bitches!", or "Hey, your dad's back!".

Each time Michael appears in the house, certain family members will appear. For example, there will be times Michael will enter the house and find Amanda in the kitchen drinking, sunbathing outside near the pool or doing Yoga, or relaxing on the couch inside. The next time Michael appears in the house, Amanda might not be around, instead, Jimmy De Santa might be in his room. However, Tracey De Santa very rarely appears in the house; when she does however, she will often be found sitting on the staircase leading upstairs or on the couch. If Michael approaches her, the player has the option of giving her $50 when she asks for money. At other times, Tracey can be heard having sex in her room behind a locked door. Following the Reuniting the Family mission, Tracey will most often be found in her room, either studying or talking to a friend on the phone. On occasion, it is possible to walk in on Amanda in the bedroom making use of a vibrator, which she proceeds to throw at Michael.

The radio station playing inside the mansion is Lowdown FM. The house is said to be protected by a security system, though both Franklin and Trevor were able to get inside undetected in the missions Complications and Fame or Shame respectively.

In the mission Daddy's Little Girl, Tracey reveals that Michael's house was used to shoot a pornographic movie the previous year without Michael's knowledge.

Other activities that can be done on the property include yoga, watching TV, accessing the Internet, smoking from Jimmy's bong, and drinking a glass of Amanda's green juice in the kitchen.

When Michael is in his house, he may find his family and the house cleaners in the middle of various activities. Some of these can spawn at the same time, like kids in their rooms and Amanda on the ground floor.

Michael can interact with them if the player presses right on the D-pad/E key when near them. When he does so, they will respond to him kindly or disrespectfully. Before the mission Reuniting the Family, Amanda usually responds to Michael with sarcastic remarks such as "I wonder where I went wrong". After Michael's family move back in, the tone of the conversations becomes a lot more positive (and even romantic). Jimmy usually responds respectfully to his father. If Michael interacts with Tracey, however, she will not respond. The house maid and cleaners do not respond when interacted with since Michael usually tells them "Keep doing what you're doing".

The following is a list of some interactions and events that may happen in the mansion:

Only after Reuniting the Family: 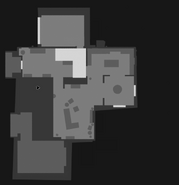 Overview from the southeast.

Overview from the southwest.

A screenshot of Michael's mansion during the Beta.

Tracey's bedroom after the mission Did Somebody Say Yoga?

Amanda's message to Michael on the fridge after the mission Did Somebody Say Yoga?

A pair of FlyUS tickets. After the mission Bury the Hatchet

A postcard from North Yankton.

A painting on the wall, reading "R North", a reference to Rockstar North.