The brand is advertised on the radio but it is not physically found in San Andreas as a business, although there is an advertisement in the official manual of the game stating the business is located on Dix Road, Los Santos.

In GTA V and GTA Online, the player can buy De Koch clothing accessories at Ponsonbys, but there are no dedicated De Koch stores in southern San Andreas. In GTA Online, organizations can store and sell looted De Koch jewelry. In addition, a De Koch clock can be found in many interiors, such as a traditional-style Hangar. 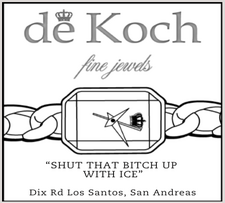 The company name, logo and their products appear to be a parody of De Beers.

A Thrax with a De Koch livery.
Add a photo to this gallery

Retrieved from "https://gta.fandom.com/wiki/De_Koch_Diamonds?oldid=1246489"
Community content is available under CC-BY-SA unless otherwise noted.