It is located on Macdonald Street. The station features an accessible interior with several refueling hoses, boxes, lockers and multiple emblems and badges on the walls. Various equipment and tools are found at the back left of the station. Two inaccessible doors lead to various areas of the interior, with two fire poles are found just beside them. The station has three garage bays, of which two front doors are permanently seen open. "Davis Fire Dept." signage can be seen mounted on the exterior wall left of the garages.

Along the frontal exterior, an American flag is seen raised. Several exterior lights are mounted above two of the garage entrances. Outside the rear of the station are the three garage back doors permanently shut. A training tower with an accessible ladder is found built onto the back of the station. The rear exterior is mostly empty and leads onto a back alley between Macdonald Street and housing on Carson Avenue.

Like other fire stations, Los Santos Rock Radio plays inside the garage.

It is based on the real-life Compton Fire Department Station 1 in Compton, California. 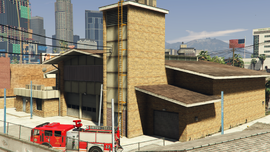 Rear side of the station. 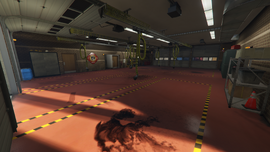 Retrieved from "https://gta.fandom.com/wiki/Davis_Fire_Station?oldid=1189251"
Community content is available under CC-BY-SA unless otherwise noted.