GTA Wiki
Register
Don't have an account?
Sign In
Advertisement
in: Characters, Characters in The Lost and Damned, Random characters,
and 3 more
English

Jay Patterson
“I'm a lawyer and I'm getting ass-raped by the law. Can you imagine what that feels like?”
— Dave to Johnny Klebitz during his random encounter.

David "Dave" Grossman is a character in the Grand Theft Auto series who appears as a minor and random character in The Lost and Damned.

Dave works as a lawyer at Goldberg, Ligner & Shyster. He is married and has a daughter. In his spare time, Dave is a prospect with the Alderney chapter of The Lost MC.

Dave first appears during the mission "It's War", when he is seen taking a hit from a marijuana bong spiked with mescaline. Chapter president Billy Grey later remarks that Dave could be "trippin' for days".

Dave's next appearance is during a random encounter, unlocked after "This Shit's Cursed". When Johnny Klebitz meets Dave outside the Goldberg, Ligner & Shyster office, Dave is very agitated. He informs Johnny that his secretary is suing him for sexual harassment, alleging that Dave "suppressed" her by looking at her breasts. Dave maintains his innocence and claims that his wife will ruin his life if she finds out about this, while their daughter would be heartbroken over seeing him in a bad light. So, he asks Johnny to "speak" with his secretary's lawyer and "encourage" him to drop the case. Johnny, looking forward to "putting the fear of the Lord into a lawyer" and getting paid for it, readily agrees. Johnny catches up with the lawyer's car and threatens to kill him unless he drops the case. The lawyer agrees to this and drives away. Johnny phones Dave to inform him that the case has been dropped, with Dave thanking Johnny and paying him $500.

As of 2013, Dave is one of two last surviving original members of the Alderney chapter of The Lost MC (along with Angus Martin). 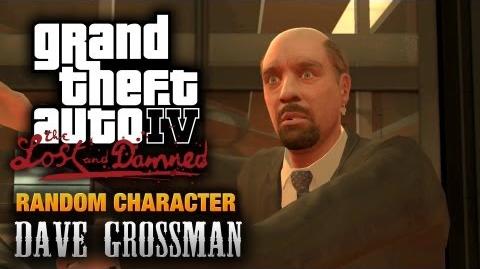