• ­Go to the tunnel entrance.

• ­Escape through the tunnels.

• ­Deliver the Oppressor into the cargo plane.

• ­Help deliver the Oppressor into the cargo plane.

Out of lives.
Oppressors destroyed.

"Enemy agents are using the Oppressor bikes as storage devices for stolen Company data. Get hold of the bikes and deliver them to a friendly cargo plane."
―Description

Data Breach is a Mobile Operations mission featured in Grand Theft Auto Online as part of the Gunrunning update.

The team starts on a parking lot of Del Perro and a first generation Baller is provided for optional transportation. Agent 14 orders them to get in the location and explains that the enemy group have stolen company data and that they have to retrieve the storage units, which are Opressor motorcycles.

The team then heads to the tunnel located in Interstate 2 and they have to make their way through the guarded tunnel to reach to the Pillbox North Station, where the bikes are parked. After going down the construction site adjacent to the Union Depository underground vault, it turns out that Merryweather units blocked the tunnel with concrete barriers, limiting their mobility through the tunnels to take out the guards from various points. The team can, however, take one of their Off-road Mesas from where the tunnel drills are seen.

After reaching the bikes, the team is instructed to leave the area through the train tunnels. Some reinforcements will arrive, but they can be taken out with the vehicle's missile launchers. After getting out, they can either keep defending themselves or just evading them with the bike's rocket booster and wings to jump and glide, skipping most of the obstacles in the way. The Oppressors have infinite missiles during this mission.

The team can deliver the bikes into a black allied Cargo Plane, which is waiting at the Los Santos International Airport with the rear ramp open to store the bikes. Once all the bikes are delivered, the mission is completed. 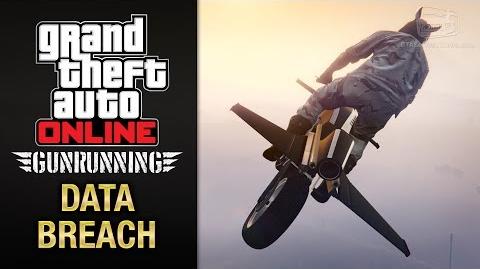 Retrieved from "https://gta.fandom.com/wiki/Data_Breach?oldid=1191296"
Community content is available under CC-BY-SA unless otherwise noted.