View source
watch 02:56
Raise a Floppa - The Loop
Do you like this video?
Play Sound
For the similar vehicle in 3D Universe, see Coach.
For the coach company, see Dashound (company).

Yes
“Is there a more iconic image than a Dashound coach broken down at the side of the road in some armpit of the Midwest? Own a true slice of Americana, then put in a stripper pole and turn it into a party bus.”
— Warstock Cache & Carry description.

The Dashound was originally a vehicle meant to appear in Grand Theft Auto: San Andreas. however, it was removed for unknown reasons. It is found in the files as "dach.txd", where it had GTA III truck wheels, different lights and a California number plate.

The Dashound makes an official appearance in Grand Theft Auto V, where it is based on an MCI Renaissance E series bus, while "Dashound" is a parody of Greyhound Lines.

The Dashound is depicted with a triple-axle design, featuring a curved windshield, numerous headlamps, side marker lights and rear circular lights. The overall design resembles the beta Coach found in a TV advertisement, with the exception of a smaller wheelbase and shorter rear overhang, and lacks the black-out side windows found on the GTA IV model. Like the Bus and the Airport Bus, the occupants enter through a single door on the right side.

The Dashound is prominently white and blue, with a red stripe passing around the vehicle, starting from the front bumper. Both bumpers feature a black, plastic-like stripe. The vehicle's name, as well as a picture of a dachshund, are on the sides of the coach. Its interior features a driver compartment that is mounted on a lower height than the passengers section.

Being a large vehicle, its speed leaves much to be desired, and, with its heavy weight and rear engine, it also leaves a slow acceleration time of 0 to 60 in more than 12 seconds. Its top speed is better than the ordinary bus. The powerful inline 4-modeled engine makes a large engine sound, sounding even louder than the Bus. However, on the down side, its large height makes it prone to tipping over, even on the slightest of corners, so care must be taken when approaching corners, slowing down is advised to make a safe corner. If it does tip over, it can be nearly impossible to get back onto its wheels, the only way possible is to use props and land relief as a 'grip', wheel-spinning on a prop will result on the coach pulling itself onto its wheels. The player can also stand on top of a moving Dashound without the risk of falling off.[1] 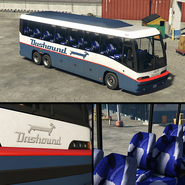 The Dashound on Warstock Cache & Carry.

The Dashound on the Rockstar Games Social Club.

The Dashhound on the updated Rockstar Games Social Club.

The Dashound in the enhanced version of GTA V.