View source
watch 02:46
The Quarry - The Loop
Do you like this video?
Play Sound
“You don't have to be drunk and obese to play darts, but you can be, and that's what makes it the sport of kings.”
— GTA V Manual

In GTA IV, it is possible to play darts in the following locations: Steinway Beer Garden in Dukes, and Lucky Winkles in Algonquin. These places serve as both drinking and darts venues. Darts is available when on dates, while socializing with friends, and when alone. To win, the player must be the first to reach 0 points, as described below, from an original score of 301. The highest amount the player can score in a round is 180.

In GTA V, there's only The Yellow Jack Inn in Great Senora Desert, next to Sandy Shores. The dartboard becomes available after the mission Crystal Maze.

In GTA Online, players can also play Darts inside their MC clubhouse and arcade heist-planning level.

When playing darts for the first time, the game will display information on how to play the game (instructions slightly edited for better explanation):

During aiming, the player's crosshair will tremble violently, making aiming slightly difficult. By pressing a specific command, the player can momentarily improve accuracy, indicated by a steadier and more focused crosshair.

Scoring a 180 with three darts is a requisite for the "One Hundred And Eighty" achievement for GTA IV.

Scoring 301 with only 6 darts will earn the player the "Checking Out" award the first time they do it in GTA Online.

When playing darts, a general rule of thumb is to initially aim for a large reduction of the player's score during the first run, focusing on reducing the score by a maximum of 180 by aiming for the inner band of the "20" section, giving the player a 60 point reduction for each shot. If the player has a score low enough to be canceled out with less than three darts but is odd, the player must attain an odd score from one dart shot, then aim for a double, as double scores are invariably even. Put it simply, basic math must also be applied when playing the game. It is possible to win a game in six darts or two turns at the board. On the first turn, score three triple twenties (180) reducing the score to 121. On the second turn, hit a triple twenty with the first dart (60), an eleven with the second, and finally finish with a bull (50). Note, the first two darts can be thrown in any order but the third must be a bull. 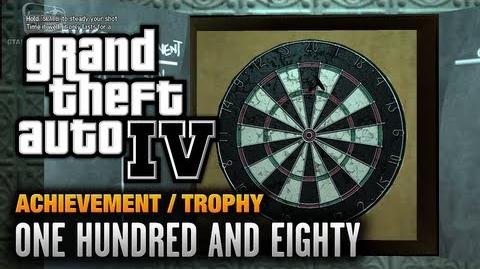 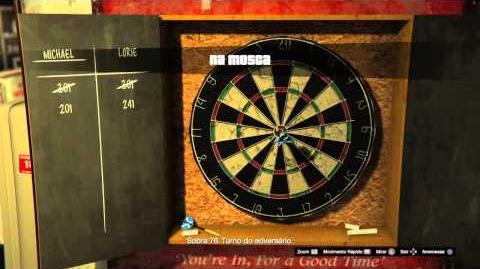