Darko: "When everything you believe is shown to be shit, you make strange choices, I guess."
Niko: "Fuck you! Strange choices? How much?"
Darko: "A thousand."
—Darko Brevic explaining why he betrayed Niko and his friends and the price paid for him to do so, in That Special Someone.

Darko Brevic (Serbian: Дарко Бревић, Darko Brević) is a central character and the tertiary antagonist of Grand Theft Auto IV. He is one of three survivors of the Fifteen Man Squad, the others being Niko Bellic and Florian Cravic.

Darko grew up in the same village in Yugoslavia as Niko Bellic and Florian Cravic. He then served alongside them in the same squad - which included twelve other boys from the village - during the Yugoslav wars. Darko developed a drug addiction and betrayed the squad for $1,000. The squad was ambushed by enemy forces and twelve of the fifteen members were killed. Darko, Niko and Florian survived and fled the scene separately.

Darko left the country shortly afterwards. Niko and Florian both separately heard that he had fled to Switzerland.

After a series of missions, one of Niko's contacts at the United Liberty Paper agency locates Darko in Bucharest, Romania. Darko is kidnapped and smuggled to Liberty City, where he is left in the cargo bay of Francis International Airport to Niko's mercy. Niko arrives at the airport with his cousin Roman, and interrogates Darko.

Darko admits to the betrayal, but reminds Niko that their squad was far from innocent: one of their squad mates, Goran, along with several others who followed him, were responsible for the deaths of some of Darko's own friends and neighbours. Darko thus became disillusioned with the war, and decided to sell out his squad for $1,000 to feed his drug addiction. Niko is horrified that he and his friends were sold out over such a paltry sum; in response, Darko asks how much Niko has charged for all the murders he has committed, pointing out his hypocrisy. He then falls to his knees and begs to be killed, telling Niko that he would be doing him a favor. He breaks down in tears, and Roman attempts to coax Niko away, observing that Darko "doesn't look like he enjoys life too much."

The player can then decide whether or not to kill Darko. If Darko is spared, Niko initially questions his decision but decides that killing Darko would not bring him the closure he seeks. As Niko walks away, Darko runs away screaming, never to be seen again. Roman, Florian and the United Liberty Paper Contact congratulate Niko on finally letting go of his desire for revenge.

Should the player choose to kill Darko, Niko will shoot him twelve times, one shot for each of his lost friends. Darko thanks Niko as he dies, and Niko walks away feeling, as he later says to Roman, "empty". 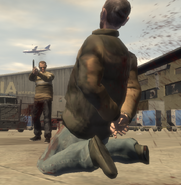 Darko being shot by Niko.

Darko, waiting for Niko's decision whether he will live or die.