In-game time
“Hey, so how's the hangover? You get really inappropriate when you're drunk out of your mind, do you know that? I've never seen someone be so offensive without saying a word. Anyway, I'll be in a much more forgiving mood if the delivery truck you decided to take for a spin is returned in one piece right now. How's that sound?”
— Agatha Baker's briefing.
“So, I have a lot of questions for you. Like, do you have any idea how drunk you were? And do you know how many illegal things you confessed to doing? And most importantly, where the hell are you? And where the hell is the delivery truck you said you were going to sleep in? You know what? Just get it back here in one piece and we'll call it quits.”
— Alternative briefing.

Damage Control is a secret Casino Work mission featured in Grand Theft Auto Online as part of the The Diamond Casino & Resort update. It is a freeroam mission given to the player by Agatha Baker.

This mission can be triggered randomly after drinking a shot of MacBeth whisky at the bar in the casino. After the player passes out, they will wake up in a semi-random location, such as on the Del Perro Beach, on North Calafia Way, or next to the 24/7 in Harmony, Ms. Baker informs the protagonist that they were very drunk and had stolen a Mule delivery truck. She tells the player that if they deliver it back to the casino, she will be in a more forgiving mood.

The player needs to enter the truck and drive it back to the casino; they have roughly seven minutes to do so. Once the vehicle is delivered, the mission is completed and Agatha calls the player.

“Congratulations. Your damage limitation skills are second to none.”
— Ms. Baker
“Given that you're almost certainly still drunk, well done.”
— Alternative call 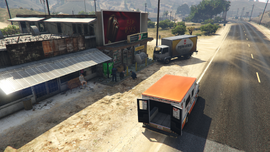