It is a small container freighter with a forward draft of 9.6 meters and an aft draft also marked at 9.6 meters.

It has a large superstructure with five levels above the deck with the bridge topmost. There is a radio and radar mast at the top of the superstructure and another radio mast at the bow. The exhaust stack is marked with a green and white striped livery with the home port painted on the top green band and identification as a Toli-Bean class freighter with 100,000 DWT (deadweight tonnage) marked on the bottom stripe. There are two six-man lifeboats mounted, one on each side of the second deck and two life raft containers mounted at the stern. A series of external stairways and ladders provide access between decks of the superstructure.

The hull is painted green with red below the Plimsoll Line. The superstructure is painted white with rust-red decks. The main deck is painted red. The bow is marked with the name of the ship painted in white on either side and it is also on the hull amidships and is painted in red on the stern. The home port of registration of Pumpherston is marked on the stern along with the numbers 45789 in black paint.

The ship has pipes on the deck that, when shot, will leak gas and do damage to anyone nearby as if it was Tear Gas.

The interior is completely inaccessible to the player. Other than during the missions where it is featured, there are no guards at all on the ship, and the player is free to explore it without taking risk.

The Daisy Lee makes an appearance in the Minisub heist setup mission. Trevor steals a Submersible attached to one of the cranes, either by dropping it using the controls on the deck, or by shooting the wires from the dock.

In GTA V, it can be found docked at the Terminal, in Los Santos. 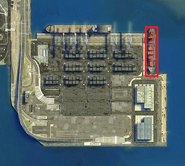