"I'm a respectable woman! I've had two hundred thousand dollars spent on my education. Daddy's got a peerage. I was babe of the month, for god's sake. I don't want to be famous for tossing off some sodomite."
— Daisie Cash-Cooze

Daisie Cash-Cooze is a character in The Ballad of Gay Tony.

She is a debutant from London, supposedly famous (having been voted "Babe of the Month") and also has a cocaine addiction. Her father is a wealthy businessman with a peerage (a highly prestigious honorary title in the United Kingdom) who spent £200,000 on her education. She also visits Shropshire (likely her family's home), St. Tropez and Liberty City, where she slept with Maisonette 9 bouncer Luis Lopez. After hooking up with Luis she returned to London, dated and got engaged to a man named Bertie (also privately educated, and allegedly bisexual but "seventy percent hetero"). She may have been lying about returning to London, but her engagement to Bertie would support her claim. She is a parody of rich celebrities in general, forgetting minor characters in their lives (Daisie continually calls Luis other names such as Dave or Leslie despite him correcting her) and trying to keep her reputation intact.

Daisie later sends Luis an e-mail thanking him for his help and reveals that she and Bertie are getting married.

The sex tape being played.
Add a photo to this gallery 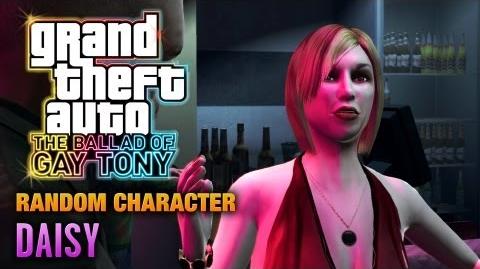 Retrieved from "https://gta.fandom.com/wiki/Daisie_Cash-Cooze?oldid=1219802"
Community content is available under CC-BY-SA unless otherwise noted.