"Sensational and innovative fiction delivered in the form of a newspaper."
― Description at Bawsaq.com.

The paper appears to be little known in comparison to other newspapers, and it does not operate a website. Despite its obscurity, pedestrians can be seen holding and reading the newspaper, and the newspaper is implied to be operating from a large, modern skyscraper, the Daily Globe Building in The Triangle, Algonquin, which bears both its name and its logo.

By the setting of Grand Theft Auto V, the paper appears to have expanded its profile. Its central building can be found at the intersection of San Andreas Avenue and Las Lagunas Boulevard in Pillbox Hill, Downtown Los Santos, and it also has offices in Vinewood. Occasionally, after completing a mission, the player can read articles written by the Daily Globe in the in-game internet. Their phone number is 555-0111. There is a copy in the prologue on the bench in the building that Michael, Trevor and Brad rob. It is right next to a copy of the Talkin’ Balls! magazine.

Daily Globe is based on the Metro International newspaper, bearing a remarkably similar logo (white text over a green rectangle with a grid globe incorporated onto the design); it is likely also based on Public Radio International, given the similar logo, and that PRI has far greater reach in the United States, but operates entirely online and via radio rather than newspaper. 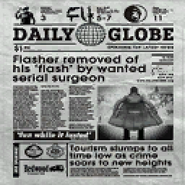 The front page texture of the Daily Globe used on newspapers held by pedestrians.

Front page of the Daily Globe read in GTA V.

Sports page of the Daily Globe read in GTA V.

The Daily Globe in GTA V. 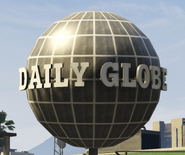 The globe on top of the headquarters.

A Daily Globe vending machine.
Add a photo to this gallery

Retrieved from "https://gta.fandom.com/wiki/Daily_Globe?oldid=1230401"
Community content is available under CC-BY-SA unless otherwise noted.