daemon
daemon2
“If you take the time to really get to know the Western Daemon, peeling away the associations with gangland hits, sleaze, class A opiates and illegal firearms as you go, you'll find there's really no reason to buy it at all. Luckily for you some reputations are harder to wash than the skid stains the previous fat-ass left on the saddle, so buckle up.”
— Southern San Andreas Super Autos description, second variant.

The Daemon is designed as a cruiser motorcycle based on a customized Harley-Davidson FXSTC Softail.

The front section of the bike features silver/chrome forks with black finish on the end of the fork legs and the triple clamps. The lower clamp holds a single circular headlight above and two smaller turning lights beside it, while the upper clamp/plate holds tall handlebars with dual supports.

The main body of the bike features a dual lower frame finished in black, as well as a fuel tank on the front, a square-shaped oil tank and a small black leather seat for the rider. The engine bay features an air filter and dual exhausts on the right side, while a transmission cover is seen on the left.

The rear section consist of a curved fender and silver/chrome dual frames on either side, mounting a black pillion pad for the passenger, an oval-shaped red light and license plate on the end of the rear fender, and turning lights on either side frame. The rear wheel is connected to the rest of the bike by a dual-sided swingarm with a grey finish, having dual suspension springs attached to the side frames and the corresponding chain drive, cover and sprocket on the left. Two additional foot pegs are seen above the swingarm, intended for the passenger.

The Daemon can be seen in two different variations: The first one features a circular air filter and two silver independent exhaust pipes, while the second one features a teardrop-shaped air filter and black shotgun-style exhaust pipes. The Daemon is commonly seen with a ghost flame decal that is determined by the primary color, with the fuel tank, oil tank and rear fender painted with the secondary color (always set to black). It uses the same wire rims also shared with bikes like the Freeway and the Wolfsbane and is fitted with medium-profile tires, with the rear one being slightly wider.

The Daemon was originally meant to appear as the Deamon in Grand Theft Auto IV, as it is featured in the game's screen shots and a beta version of its file exists in the PC version of the original game. The bike assumes a more standard paint scheme with no decal, and features a small front fender, a smaller headlight and more curved handlebars with handbrakes. The fuel tank was smaller and has the corresponding WMC logos, while the oil tank was finished in silver and features "Daemon" badges on it. The rear light and license plate are mounted on the end of the rear fender rather than behind the pillion pad. Interestingly, the rear sprocket is missing.

The Daemon returned in Grand Theft Auto V with the same design as in TLAD, this time featuring fully-chromed fork legs and triple clamps, dark tan handlebar grips, dark tan seats embroidered with the Lost MC insignia and yellow springs, as well as a teardrop-shaped air filter and silver independent exhaust pipes. The rear fender, brake calipers, tail light and license plate appear to be reused from the TLAD iteration of the Wayfarer, as well as several components available as modifications, being the Chrome Mirror, Custom Tank & Speedo, Seat Tassels, Rear Seat and Sissy Bar. The stock exhaust matches the dual exhaust pipes sometimes seen on the Wayfarer; though the Wayfarer's single exhaust is omitted. The vehicle also incorporates a single "Chopper Bike" speedometer dial in the enhanced version, also used on bikes like the Bagger and the Police Bike.

The primary color of the bike is applied on the ghost flame decals of the fuel tank, while the secondary color is applied on the ones from the rear area. It uses a set of black rims similar to the "Bobber" rims available in Los Santos Customs and medium-profile tires, with the rear one being slightly wider.

A highly-customizable version of the Daemon was featured in Grand Theft Auto Online as part of the Bikers update, released on October 11th, 2016, during the Daemon and Raptor Week event.

This model is largely identical to the standard version, but the ends of the fork legs and the triple clamps are finished in the same color as the rest of the front forks, the fuel tank having no side caps, the seats being black leather with no insignias and the exhaust pipes being black. Like most motorcycles featured in the update, it features a protruding primary drive with an Atomic-branded belt, as well as a chain drive, which are fully animated.

Color distribution is changed in comparison to the standard Daemon, where the primary color is applied on the fuel tank, oil tank and rear fender, while the secondary color is applied on the forks, frames, swingarm and chain cover. It uses the same wheel design as the standard Daemon, but the rims can support a dedicated color, which can be painted by selecting a custom rear wheel, applying a color and change back to the stock wheel (as it won't reset to the default alloy color).

The Daemon is a rather heavy motorcycle with moderately good speed and having a further stopping distance similar to the Angel. However, it has higher acceleration rate, at the cost of high degree of oversteer, so players should he careful when driving at high speeds.

The Daemon uses a chain-driven, V-twin internal combustion engine with a 5-speed manual transmission, as evidenced by the foot-actuated gear shifter. The engine sound is very low revving and odd-firing, possibly attributed to being either completely or partially unrestricted.

The Daemon has similar statistics to the Hexer in terms of acceleration and top speed. However, it has great steering capabilities, able to take corners easily with no sights of oversteer compared to its TLAD rendition, although it may suffer from slight understeer at higher speeds. Braking is average.

Again, the Daemon uses a chain-driven, V-twin internal combustion engine with a 4-speed manual transmission, as evidenced by the foot-actuated gear shifter. It has a low-revving, odd-firing engine sound that is also shared with the Hexer.

Installing the "Rear Seat" modification will increase its traction slightly, in the same way as a spoiler.

The second version of the Daemon appears to retain most of the qualities from its counterpart, although seems to be slightly slower in terms of acceleration, but makes up for the slightly higher top speed.

Like the Lost MC version, the Daemon uses a chain-driven, V-twin internal combustion engine with a 5-speed manual transmission, as evidenced by the foot-actuated gear shifter. It has a mid-revving and odd-firing engine sound that is quite loud compared to the Lost MC version and the Hexer, which is also shared with the Chimera added in the same update.

A beta Daemon extracted from the PC version of Grand Theft Auto IV.

Three variations of the Daemon in The Lost and Damned. The third one (lowest side) is used by the Angels of Death in Gang Wars and has both set of extras together. 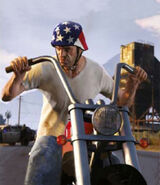 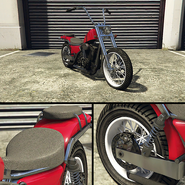 The Daemon on the updated Rockstar Games Social Club.

The Daemon in the cinematic preview on GTA V Rockstar Games Social Club.

The Daemon Custom on GTA Online Rockstar Games Social Club, which was incorrectly used as the cinematic preview image of the Daemon.

The Daemon Custom on the updated Rockstar Games Social Club.

The Daemon Custom in the cinematic preview on Rockstar Games Social Club.

During the course of GTA IV and The Lost and Damned, it is one of the main motorcycles (along with the Angel) used by The Angels of Death.

During the course of GTA V, it has become one of the primary bikes used by the Los Santos chapter of The Lost MC.

In GTA Online, Daemons appearing during missions and gang attacks involving The Lost MC cannot be made into a personal vehicle. The Daemon does, however, frequently appear roaming the streets, and can be made into a personal vehicle. There are no visual differences between those used during missions and those appearing on the streets.