Wasted
Busted
Tracey, Jimmy, or the rental guy die or are spooked
Seashark destroyed
Bikes trashed
The bike is stuck or unrideable

In-game time
“Michael and Jimmy pop out for some father/son bonding.”

Tracey: "So what? You sent him out to spoil my day, too?"
Jimmy: "I didn't know that he was going to come get you, I just told him where you were. You know, he got the crazy look into his eyes. You know, like he gets sometimes? And he just went."
―Tracey arguing with Jimmy.

Daddy's Little Girl is a mission in Grand Theft Auto V given to protagonist Michael De Santa by his son Jimmy.

At his mansion in Rockford Hills, Michael is eating from a bowl of potato chips and is trying to watch a movie when his son Jimmy begins making too much noise upstairs. After trying to turn his TV up, Michael soon runs up to Jimmy's room and tells him to keep it down. After being told rather rudely to go away, Michael grabs one of Jimmy's chairs and smashes his TV. The two yell at each other, but finally Michael relents and states that he just wants to spend time with his son. Jimmy reluctantly agrees to go with his dad.

The two drive to Vespucci Beach where they rent bicycles at Mr. Spoke Bike Rental and race to Pleasure Pier. There the two chat, which again turns into an argument. To distract his father, Jimmy tells Michael that Tracey also causes trouble; in fact, at the very moment, she is on a boat with famous people, trying to get on TV. Michael takes off his shirt and shoes, jumps off the pier and swims to the boat. Upon getting to the boat, he sees Tracey dancing with various men. Michael confronts his daughter and the men she is with, eventually throwing a stereo into the ocean and tells his daughter to come with him. They steal a Seashark and speed off, but the boat's owner, Freddy Slade, and some of his friends chase after Michael and Tracey and try to shoot them. After losing or killing their pursuers, Tracey and Michael land the Seashark near where Michael left Jimmy. Tracey starts to attack Jimmy, but he defends himself by blaming their father. They both soon leave in a taxi and Michael stays to smoke.

Michael getting annoyed with Jimmy.

Michael and Jimmy leaving the house.

Michael getting on a bike.

Michael diving into the water.

Michael pushing someone off the yacht.

Michael and Tracey speeding away from the pursuers. 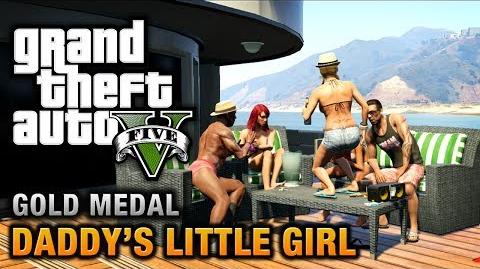 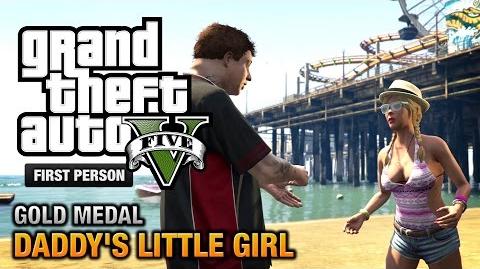 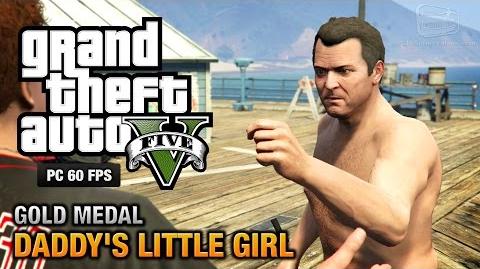