The Da Nang Boys (named after the Vietnamese region and city of Da Nang) is a Vietnamese crime family in Grand Theft Auto: San Andreas based in San Fierro, San Andreas preparing a full move to the United States of America. Although they are Vietnamese, the gang is based on the real-life Chinese smuggling gang the Snakeheads

The gang is extremely violent, with major interests in protection, narcotics and human trafficking. While the Da Nang Boys are portrayed as a major Vietnamese gang in the city, two other sects, the Shining Razors and the Butterfly Children, were mentioned in the game and in the official GTA San Andreas website, and are said to be active in Easter Basin. Their turf is mainly in Easter Basin and their main front is their ship anchored out in San Fierro Bay. They also have turf in Esplanade North and Esplanade East. The Da Nang Boys have three different members that walk and drive around their area; the first guy wears a gray army T-shirt, blue jeans, yellow shoes, a shaved head and tattoos. The second guy wears sunglasses, gold and black robes, black pants and black shoes. The last guy wears a black do-rag, a black Prolaps T-shirt, olive pants, black shoes, and has a black wristband on his right arm. They wield weapons such as pistols and Micro Uzis. As for their gang cars, they are seen driving around in Tampas, Mananas and Buccaneers, and their favorite radio stations seem to be Bounce FM and SF-UR, as evidenced when the player jacks one of their gang vehicles.

The Da Nang Boys are known to have caused trouble with the drug-dealing organization, the Loco Syndicate. In one instance, they kidnapped the syndicate's head, Mike Toreno. Eventually, though, Carl Johnson and T-Bone Mendez rescue Toreno and bring him back safely to the Pleasure Domes in Battery Point. In another instance, Carl is instructed to guard a drug shipment van which is on the way to the yay factory in Doherty. In doing so, Carl manages to destroy four Da Nang Boys-caused roadblocks, which would have prevented the shipment from arriving at the factory.

The Da Nang Boys are also at war with the local San Fierro Triads and were responsible for the massacre of the Blood Feather Triad, a subsect of the Triads. They have also targeted the Triads' leaders, namely Ran Fa Li and Wu Zi Mu, in one instance attempting an assassination. With the help of Carl, however, the Triads responded with numerous attacks and schemes, such as an amphibious and an aerial attack on the Da Nang Boys' freight ships. Though the aerial attack proved to be unsuccessful, Carl manages to infiltrate the cargo ship, and frees some refugees held captive by the Da Nang Boys. He also managed to kill many members of the gang, including their leader, The Snakehead, thus weakening the gang severely and reducing them to a petty street-gang.

The Da Nang Boys around their gang turf.

The Da Nang Boys attacking Grove Street territory due to a glitch.

The beta version of the Da Nang Boys. 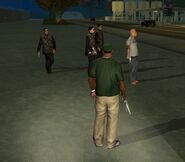 Retrieved from "https://gta.fandom.com/wiki/Da_Nang_Boys?oldid=961684"
Community content is available under CC-BY-SA unless otherwise noted.