Standard White - 100%
“Take a good look at the DR1 and close your eyes. Do you feel faint from the smell of burning rubber? Is the intensity of the exhaust fumes making your hair fall out? Can you feel the splash of insects as they pass through your unprotected mouth and down your throat? Yes, yes and yes. Now get inside and say that again, only faster. Much faster.”
— Legendary Motorsport description.

The Declasse DR1 is an open wheel car featured in Grand Theft Auto Online as part of the Los Santos Summer Special update.

The DR1 is a single-seat race car presumably based on the Dallara DW12 IndyCar. Several liveries are available to replicate the design of IndyCar teams and specific drivers including Will Power's #12 Team Penske livery.

The DR1 features a narrow, low-profile design, having the distinctive long nose with the large wings on the front, featuring a set of fins. The driver compartment is open, with the large side intakes and loop above the cabin, as well as the large rear wing with the single tail light. The entire underside of the vehicle is carbon plated, similar to the other Open Wheel vehicles. Its interior uses a unique and modernized steering wheel with a digital display, which is shared with the BR8.

The primary color of the vehicle is applied on the body, while the secondary color is applied on the horizontal fins of the rear wing. Also, similar to vehicles like the Drift Tampa or the Hotring Sabre, the DR1 features the use of racing slicks for the wheels, along with its own custom "Race" wheels.

The car has an extremely high speed but it suffers from slower acceleration than the PR4. Like all Open Wheel cars it tends to oversteer and lose control if every part falls down. It turns well in curves making it suitable for races. Due to the player not being able to use any guns in the car, it's not recommended to go in missions where shooting is required.

In addition to its already impressive speed, the DR1 also has KERS, allowing the driver to increase their speed even further by activating the boost, in a similar manner to the Lectro and the Vindicator. The boost lasts for four seconds and it takes about six seconds to recharge to its full capacity, but it does not have to be full to activate it. In order for the boost to recharge, the vehicle needs to begin slowing down to let it charge. Stopping the vehicle, accelerating, or reversing will prevent the boost from recharging.

* There are 10 liveries available to be applied, most of which reflect those that were used by various Formula One teams from the early 1990s.
** Vehicle is limited to Wheel Color, Bulletproof Tires and Tire Smoke. Custom Wheels are restricted to the options listed above. 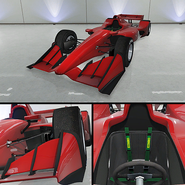 The DR1 on Legendary Motorsport.

The DR1 in the cinematic preview on Rockstar Games Social Club.