This car seems to be rather unique in design, but takes many design cues from the Pontiac G6 (main styling/shape, and the bottom of the front clip), the 1999-2005 Pontiac Grand Am (the greenhouse/roof and shape of the back doors); the front fascia resembles that of a 2003-2005 Pontiac Sunfire with the headlights looking similar to the 2006-2011 Honda Civic; the taillights look somewhat like that of the 2000-2005 Pontiac Bonneville (the reverse lights integrated on the strip with "IMPONTE" on it seems similar to the ones on the 1995-1999 Chevrolet Luminas, the actual strip itself is closer to the Bonneville). The black-tinted roof and rear lights that run the length of the car are inspired from the Subaru SVX. The dashboard features red lighting, a Pontiac trademark.

Despite its near similar design, the DF8-90 is available in three different variants, all with the same body, range of body colors, and handling. Each one is identifiable by the presence of a spoiler or the type of spoilers used, and their badges on the trunk lid:

The DF8-90 is equipped with a GPS system with a female voice, but only if the player leaves the "selected cars" (default) option in the audio menu.

Handling wise, although it sacrifices ride, it makes up for it by being very good with avoidance manoeuvres and scores above average, not far in top speed to far more expensive vehicles. Accident deformation is good, considering its rather sporty nature, but it is not the best. The cabin holds up well and the same goes for the roof. The DF8-90 can sustain multiple frontal impacts before becoming immobilised or catching fire.

Comparison of three DF8-90s as viewed overhead from the rear, depicting those of the basic variant, the V6 Sport variant and the V8 Turbo variant. 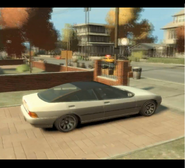 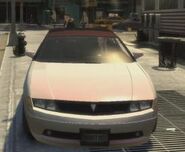 DF8-90 with black roof when exposed to sunlight.
Add a photo to this gallery

Retrieved from "https://gta.fandom.com/wiki/DF8-90?oldid=1132629"
Community content is available under CC-BY-SA unless otherwise noted.