Cypress Flats appears as a large industrial estate bordered by the neighborhoods of La Mesa to the north, Rancho to the north west, Banning to the west, Elysian Island and Terminal to the south, and Murrieta Heights and El Burro Heights to the east.

The estate almost entirely revolves around Popular Street, a large 2-way street running north to south. It is home to some of the largest warehouses and industrial facilities, including several purchasable Warehouses and Vehicle Warehouses in GTA Online. Its prevalence in the city also grants it many appearances throughout the story of Grand Theft Auto V and missions of GTA Online.

Given its size, the area consists around 4 notable "blocks" on which warehouses and industrial buildings are built upon. Each of these blocks is also divided by a north-south defunct rail line, indicating an industrial railway service once operated throughout the area. The lines are embedded into the ground with dirt and foliage in some areas, suggesting a very long retirement for the service. The lines travel from block to block and most congregate at a large railyard at the very east of the neighborhood.

While no stations are located in the area, the Freight Train will pass through Cypress Flats via the underground tunnel which follows Popular Street, before popping out near Chum Street and passing by Elysian Island. There are no entrance points to the tunnel via street level.

In terms of region, according to the game's area recognition, Cypress Flats is bordered by Innocence Boulevard in the north, the Elysian Fields Freeway in the east, Hanger Way and Chum Street in the south, and the western side of the Los Santos River in the west.

Cypress Flats is based on Vernon, California in terms of landmarks and infrastructure. However, it is geographically based on Long Beach. 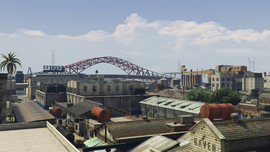 Overview of the neighborhood.