Standard White - 100%
“Powerful, intimidating and a little sadistic, driving the Cypher is the most hardcore experience to come out of Germany since der menschlichen Toilette.”

The Übermacht Cypher is a sports car featured in Grand Theft Auto Online as part of the continuation of the Los Santos Tuners update.

The design of the car is relatively simple and aerodynamic, where the front end features a trapezium-shaped intake on the centre that spans about half the car's width, smaller intakes beside the central one and a plastic-like bridge/splitter below. On the upper area, the car has a trapezium-shaped grille that is about the same width as the lower intake and features a silver/chrome surrounding, while the outer sections have black housings with modern, hexagon-shaped LED strips, as well as inner vertical high-beam lamps. The bonnet area has an elevated shape near the windscreen and the modern manufacturer logo on the front, while the bonnet compartment opens to reveal an engine bay with a black detail around.

On the sides, the car has small vents with dual silver/chrome horizontal elements on the front fenders, black horizontal door handles and carbon-fibre side skirts, as well as body lines passing around the front vents and on the sides, which become thinner on the rear fenders and almost reaching towards the tail lamps. The greenhouse area has black trim around the side windows and rounded mirror shells with black supports, as well as a single fin on the rear portion of the roof.

The rear of the car features a small boot lid with the badges and the number plate on the rear, as well as black housings with J-shaped red lamps and white lower strips, where the former splits between the outer main lamps and the inner brake lamps, while the latter splits between the outer turn indicators and the inner reverse lamps. On the bumper area, the car has thin exit vents on the outer sides and a carbon-fibre lower side, having diffuser blades on the centre and rounded openings on either side for the dual exit, dual exhaust tubes.

The interior of the car reuses the same textures and dials from the Jugular, which is essentially a derivative of the one found on cars like the Nero, the XA-21 and the Revolter, and the analog dials are also borrowed from the Raiden. The manufacturer emblem can be seen on the horn cap.

The primary colour of the car is applied on the bodywork, while the secondary one is applied on the mirror shells, the details of the engine cover and the brake calipers. A trim colour is also available for most of the interior, as well as a dial colour. It uses a set of rims identical to the "Synthetic Z" sport rims available in Los Santos Customs, wrapped in low-profile tyres. These rims can also support a dedicated colour, although only naturally-generated examples may have one. 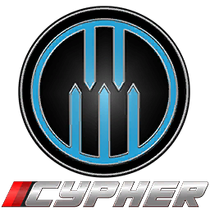 The vehicle features an engine model similar to the Rebla GTS, coupled to a 6-speed gearbox in a front engine, rear wheel drive layout. It shares the high-revving and loud sound from the Schlagen GT and the 8F Drafter.

The Cypher is overall a decent sports car for street races. It has good acceleration and top speed, and it can navigate around turns without the risk of spinning out. The downside, however, is that the Cypher can bottom out when turning on bumpy roads or when driving through curbs, so extra care should be taken when navigating around them. That being said, it is still very grippy for a RWD vehicle and is rivaled by the Calico GTF in terms of handling, but it is far more controllable around tighter turns. Its overall durability, while somewhat strong, can be a hindrance when colliding at high speeds against traffic or other players in a race, which then results in the Cypher flinging around or rolling over if unlucky. 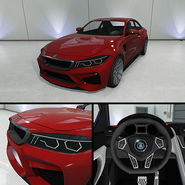 The Cypher on Legendary Motorsport.

The Cypher in the cinematic preview on Rockstar Games Social Club.