Standard White - 100%
For the beta car in Grand Theft Auto: Liberty City Stories, see Cyclone GT.
“The Coil Cyclone is here to prove one thing: the days of the internal combustion engine are over. Sure, it was fun while it lasted. Just like your psychotic, knife-wielding ex was phenomenal in bed. But that fossil-fuelled comfort zone is about to be nothing more than a distant speck in your rear-view mirror as you surrender to this harbinger of the electric age. True power is here. Drive the lightning.”
— Legendary Motorsport description.

The Coil Cyclone is a two-door electric hypercar featured in Grand Theft Auto Online as part of the Smuggler's Run update, released on November 14th, 2017, during the Cyclone Week event.

“In the past, you'd have been forgiven for thinking that electricity was for the weak and environmentally conscious. Those days are over, and the Coil Cyclone is here to change your mind faster than a 1,000 volt blast straight to the jewels. Fly off the line faster than a toupee in a hurricane and usher in the electric age with the Coil Cyclone - now available for purchase at Legendary Motorsport.”
— Rockstar Newswire description.

The Cyclone primarily resembles the Croatian-made Rimac Concept One, while the rear fascia takes influence from the Koenigsegg Agera. Several modifications at Los Santos Customs allow the vehicle to resemble the Rimac Concept S.

The Cyclone is distinguished by its sleek profile, where the front bumper area features a large intake with a carbon fibre trim around it and two small ducts on either side, while two CFRP details can be seen on the outer edges. On the upper area, large carbon-fibre housings are seen on either side of the car, each one having a circular inner lamp and outer LED-like strips. The bonnet area is very curved and bears the corresponding Coil emblem on the front.

The sides feature inset sections running through the doors and reaching the rear fender vents, along with pronounced wheel arches. Carbon-fibre details can be seen running below the doors and following the curvature of the same. The greenhouse area features plastic trim around the windows, carbon-fibre mirror shells and small rear-quarter windows, as well as a large rear sloped window over the battery cell.

The rear end features a dual set of square-shaped tail lamps, along with small light strips that are separated by plastic details. A carbon-fibre detail spans the whole width of the car and ends on the rear quarters of the vehicle, surrounding various exit vents placed on the rear end, along with a license plate mounted on the central vents. The rear bumper has mouldings for a single triangle-shaped exhaust and twin carbon-fibre diffusers. The underside of the car is mostly carbon plated, leaving the axle areas exposed.

The dashboard and interior is shared with the one used on the Specter and Specter Custom, sharing the curved dashboard and the same dial cluster. However, the steering wheel bears the corresponding Coil emblem.

The Cyclone's primary colour is applied on the bodywork, while the secondary colour is applied in the form of stripes running from the front quarters to the doors, the interior stitching, the details around the battery cell and the brake calipers. An interior/trim colour is also available for the vehicle, which paints the dashboard, steering wheel, doors, middle section and inner seat portions, as well as the details around the AC units and the dial cluster. It uses six-spoke dual rims with a similar pattern to the ones seen on cars like the Surano and the Kuruma, but entirely unique in terms of details. 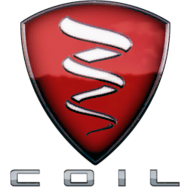 The vehicle accelerates like no other vehicle in the game. Being an electric hypercar, it has the fastest wheel-powered acceleration of any vehicle in the game, going from 0-60 mph in less than two seconds when fully upgraded. Only rocket-powered vehicles such as the Rocket Voltic can outaccelerate it. However, the traction is by far the worst in the Supers class, as the vehicle lacks in cornering speeds and spins out quite easily, despite its all wheel drive system. The all-wheel-drive system juxtaposed with the extreme amounts of torque create both low-speed oversteer and high speed understeer. The extreme acceleration must be managed, else the player will careen into obstacles ahead.

The Cyclone is powered by a large battery on the back, and like other fully-electric vehicles like the Voltic, it has a single-speed reduction transmission and little to no noise coming from the car (only heard in quiet areas and with the radio off). 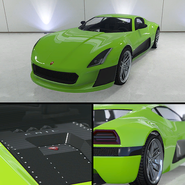 The Cyclone on Legendary Motorsport. 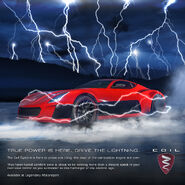 The Cyclone on the updated Rockstar Games Social Club.

The Cyclone in the Cinematic Preview on Rockstar Games Social Club. 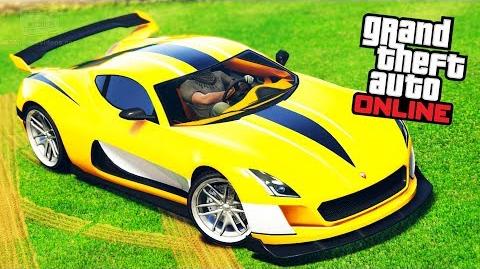 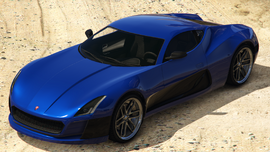