Hunter Platin
“OK, so the Leones are fighting wars on two fronts. They're in a turf with the Triads with no sign of either side giving up. Meanwhile Joey Leone has stirred up some bad blood with the Forellis. Every day they're losing men and influence in the city. Salvatore is becoming dangerous and paranoid. He suspects everybody and everything.”
— Curly Bob to Miguel and Catalina

Curly Bob worked as a bartender at Luigi's Sex Club 7, managed by Luigi Goterelli and Mickey Hamfists. When speaking, he would often sniff between sentences.

In the mission Cutting The Grass, Salvatore Leone, the leader of the Leone Family, suspected that he was telling the rival gang Colombian Cartel about plans of the Leones in exchange for SPANK, a drug produced by the Cartel (which Curly Bob is addicted to). He ordered Claude to follow Curly Bob in order to find out if this was in fact happening and eventually kill him if that was the case, which Claude does after observing him giving information to Catalina and Miguel in the Portland Harbor. 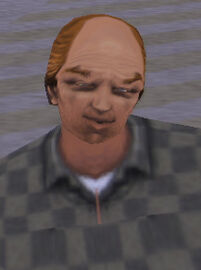 Curly Bob in the original version of GTA III.