Members of the "Cubans" in Grand Theft Auto: Vice City.

In both games, the Cubans are led by Umberto Robina and are based in the Little Havana district of Vice City.

Cubans are considered to be the prominent gang in the southern end of the Vice City Mainland, considering that they defeated both the Cholos and the Haitians.

The gang serve as one of the player's allies in both games they appear in.

In 1984, the Cubans are known as the Los Cabrones and are in conflict with a Mexican street gang named the Cholos over control of Little Havana. According to MeTV, this wasn't the first time the Cubans had been involved in gang warfare and there were many more wars before the current one.

Umberto Robina employs Vic Vance to aid him in his fight against the Cholos. Umberto Robina asked Victor to prove his worth to his gang by picking up a package from Downtown in a race with Hilberto, Carlos, Fernandez, Ronaldo and other Cuban gang members.

Vic then begins to work with the Cubans, which includes killing various Cholos gang members who are causing havoc in Little Havana, and picking up Alberto Robina from the Hyman Memorial Stadium to avoid a possible abduction and/or murder. The Cubans eventually win the war with the Cholos after stealing their weapons supply and destroying the warehouse they had been stored in.

In 1984, their outfits were more simple, usually wearing polo shirts or short sleeved shirts, slacks and sporting a mustache or stubble.

Tommy eventually returns to working for the Cubans, and helps them destroy a Haitian drugs factory in Little Haiti. The final result of the war between the Cubans and the Haitians is unknown. Umberto Robina and Cuban gang members also treat Tommy Vercetti as an equal, with Umberto at one point saying: "Tommy, to us, you Cuban".

Cuban gang members are either seen wearing white sleeveless shirts with a Japanese symbol and writing, red bandanas and jeans, or a fedora hat, light yellow shirts and black pants in Vice City. They are armed with 9mm pistols.

The 10th anniversary version of GTA Vice City had all references to the Cuban and Haitian people removed, (along with a number of other trademarks), in response to Cuban and Haitian groups in the United States who threatened to use action against Rockstar Games, on the basis that they were being discriminated against. This is also why in GTA Vice City Stories the gang is referred to as Los Cabrones as opposed to simply "The Cubans", as they were in GTA Vice City. Los Cabrones literally means "The Bastards" in Spanish.

Oddly enough, in the 10th anniversary version of GTA Vice City, unlike the Haitians, the name Cubans wasn't censored within the game dialogues and subtitles. 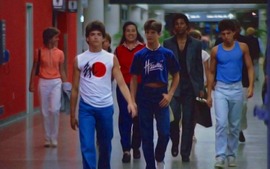 The extra (right) that serves as the inspiration for one of the gangsters' models in GTA Vice City. 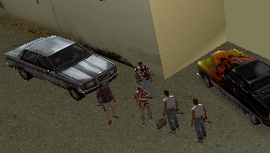 The Cubans meeting Diaz' Gang before a Haitian ambush in the mission Guardian Angels in GTA Vice City.