In all of its appearances, the Jetmax is defined as one of the best boats, as it offers excellent speed and acceleration, more than any other sea vehicle, given that there are only a few sport boats in the games it appeared.

The Jetmax is referred to as the Cuban Jetmax in Grand Theft Auto: Vice City, affiliating the boat with the Cuban gang and occasionally appearing in a number of missions where Cuban gang members are present. The Jetmax only appears in a red and yellow paint job in Grand Theft Auto: Vice City, but assumes a wider range of colors in the later games. The Jetmax in general is distinguishable by its large back-mounted supercharged engine, connecting dual exhaust pipes and jet-only propulsion. It features very aggressive lines, with a long hull that extends far forward of the small cockpit. Two air intakes are located on either side of the cockpit, and help feed the massive engine. Seating consists of a pair of bucket seats and a (unusable) rear bench. A small windscreen shields the driver and passengers.

The GTA San Andreas rendition of the Jetmax is given a "Jetmax II" designation at the back of its hull, similar to has been done with the Squalo. The Jetmax in this game also has a few additional details, including docking cleats along the sides and an additional pair of air intakes atop the forward hull.

The Jetmax's capabilities are evidenced by its use as a reward for certain actions or missions. In GTA Vice City, the Jetmax is unlocked by purchasing the Boatyard. In GTA San Andreas, Carl can unlock the boat by achieving all gold medals at the Boat School.

The Jetmax in this universe has a more conventional design: it is shorter than the 3D Universe version and the large, exposed engine was removed in this rendition, as was the jet propulsion. However, it still has a sleek design, and comes in a variety of similar two-tone colors.

The lines of the boat were simplified greatly from the 3D Universe. The central ridge and depressed lines along the sides have been removed in favor of a flat, clean hull. The bow is much sharper, and this is emphasized by the two-tone paintwork. The windscreen is now divided down the middle, and is angled slightly. The cockpit has been made much larger, and although the bucket seats remain the bench now wraps along the edge of the cockpit to a much greater extent. The exposed engine is gone, and has been replaced by a completely enclosed engine with two prominent air intakes mounted on top. This engine drives a pair of propellers mounted below it. Behind the engine is a large swim step. Additional details have also been added - a pair of rails run along the forward hull from the windscreen and meet at the bow, there is a pair of headlights mounted in the bow above the waterline, the dashboard is far more detailed, and there is a radio antenna mounted on either side of the stern.

The design remains the same as GTA IV, although new color schemes have been given to the boat, and in the enhanced version, the interior has been restored to meet the first person dashboard standards.

Although the Jetmax is rather conventional in design, it is still the fastest boat. Again, its acceleration seems to be higher than other boats, including the Squalo, but the handling is slightly inferior to that of the mentioned counterpart. The Jetmax, however, seems changed over its 3D Universe counterpart, as the speed is reduced in favour of more control.

The Jetmax is still one of the fastest boats, having better acceleration and top speed. Due to the revised water physics, the Jetmax may experience some reduction of speed while sorting out waves, although it can still be stable and rarely gets flipped down. 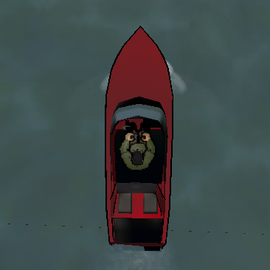 The Jetmax in the Android/iOS version of Grand Theft Auto: Chinatown Wars.

The Jetmax on the Rockstar Games Social Club.

The Jetmax on the updated Rockstar Games Social Club.

The Jetmax in the cinematic preview on Rockstar Games Social Club. 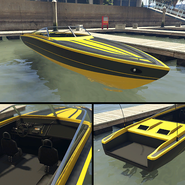