GTA Wiki
Register
Don't have an account?
Sign In
Advertisement
in: Vehicles, Vehicles in GTA V, SUVs,
and 10 more
English

Police/Government Plate - 100%
“The Crusader is a military-grade SUV popular with US armed forces in the Middle East and lesbians in the Pacific North West. Perfect for navigating hostile terrain like bombed-out villages and vegan craft fairs. Its four-cylinder diesel engine comes nowhere near to meeting US emission standards, but we're guessing that carbon footprint isn't top of your priority list.”
— Warstock Cache & Carry description.

The Crusader is essentially a military variant of the Mesa, which features a desert camo livery, along with a military star printed on the sides, similar to the stars on Willys Jeeps during World War 2.

In comparison to the regular Mesa, the Crusader comes with unique details, being a flat utility bumper with two hooks on it, a hood with various details on top and safety hooks on the sides, black arches, stepside bars on the rear bed, and a flat utility rear bumper with three hooks on it. The vehicle lacks stepsides, license plates and badges. The Crusader often comes with a black soft top that covers the upper side of the cab and the rear compartment, although in rare ocassions, it comes without them.

Its interior and dials are identical to the Cavalcade set found on the Mesa and many other SUVs. According to the files, the Crusader uses its own set known as "Cavalcade Army", despite it being identical, hinting towards beta changes.

The vehicle is set to spawn in a white color, which is only seen on the trimmings found on the inverse of panels, engine bay and inside the trunk bed. It uses the same wheels as the regular Mesa, albeit finished in black.

By entering a Crusader, a Carbine Rifle is awarded to the player.

The acceleration and top speed of the Crusader are unremarkable, but it makes up for this with better handling. However, over-steer may become a problem, especially at high speeds. Its high center of gravity may make it prone to tipping over on uneven terrain. It is not capable of very much besides surviving excessive gunfire and multiple crashes before stalling or catching fire. It is somewhat slower than the regular Mesa, but makes up for its improved durability.

The Crusader's headlights seem to be more vulnerable to being broken than the civilian Mesa's. This is due to the flat bumpers, which are less protective than the rounded bumpers on the civilian Mesas. Also, the Crusader, due to being classified as a Government/Emergency vehicle, cannot be modified at Los Santos Customs, but are still allowed to be repaired.

The Crusader is stated to be powered by a four-cylinder diesel engine, true to its in-game engine model, laid transversely in a front-engine, all-wheel-drive layout, however, the cover is more similar to that of a V8. Its engine noise is different from its civilian version, sounding similar to the Cavalcade and the Sandking. Strangely, despite being almost identical to its civilian variant, the Crusader's engine layout and position are also completely different. 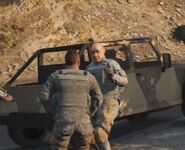 A roofless Crusader guarded by the Military in Rampage 4.

Interior of a Crusader. 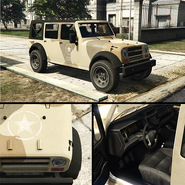 The Crusader on Warstock Cache & Carry.

The Crusader on the updated Rockstar Games Social Club.

The Crusader in the cinematic preview on GTA V Rockstar Games Social Club.

The Crusader in the cinematic preview on GTA Online Rockstar Games Social Club.