A Crane in GTA V.

In Grand Theft Auto and its two expansion packs in Grand Theft Auto: London, cranes were positioned at the docks in the games. Cranes were used to transport vehicles onto a ship where the player was given varying amounts of money depending on the condition of the vehicle. They are meant to be a source of income other than the missions. They are also used in the missions of the game. The crane works by driving a vehicle under a designated area and exiting when the crane starts moving and giving money when the vehicle is on the ship. The amount earned is also affected by the player's multiplier.

In Grand Theft Auto 2, cranes are used similarly to the way they are in GTA. A vehicle is driven under the crane and lifted into a certain area where money is awarded to the player. Instead of putting vehicles on a ship for export, the crane in GTA 2 drops vehicles into a car crusher. The awards given to the player are also more rewarding than in GTA since certain vehicles offer some other rewards such as weaponry. Depending on the kind of car taken to the crane, the player will get a power up, such as invisibility, double damage, or a cop bribe.

In Grand Theft Auto III and Grand Theft Auto: Liberty City Stories, the crane is operated by an NPC at the Crusher. Players need to park a vehicle in an area marked by old car tires. The NPC crane operator will then automatically pick up the car, and put it into the crusher. The crusher would then close, as soon as the crane puts the vehicle inside of the crusher. There is another crane nearby the Import Export Garage, where an NPC picks up vehicles that the player has to deliver: these are the emergency vehicles.

In Grand Theft Auto: San Andreas, the player is able to operate various large construction cranes around San Andreas outside of missions. The player can adjust the height and position of the object that the crane is holding (either a wrecking ball or a large magnet) and use it to smash/pickup objects. Cranes in GTA San Andreas are manufactured by DUDE or Final Build Construction. The magnet is able to pick up any vehicle in the game, with the exception of aircraft and boats.

Cranes can be found at the following locations:

In Grand Theft Auto: Chinatown Wars during the mission "Counterfeit Gangster", the player is required to use a crane to dump cars in the water. Also, the player uses a crane to get Melanie's van during Parking Pickle, a exclusive mission for PSP only.

A crane is situated on the closed-off section of Frankfort Avenue, between Hematite Street and Iron Street. The mission "Bang Bang" in The Ballad of Gay Tony requires the player to destroy the crane with Sticky Bombs.

The crane in Grand Theft Auto with information panel explaining it, and a crane picking up a car.

A crane in the Downtown area of Grand Theft Auto 2, ready to pick up a car. 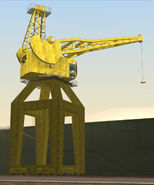 The crane that takes cars to the Crusher

Trevor Philips driving a crane in Scouting the Port.

Retrieved from "https://gta.fandom.com/wiki/Crane?oldid=1286214"
Community content is available under CC-BY-SA unless otherwise noted.