Crack Dealers are criminal pedestrians appearing in Grand Theft Auto: San Andreas. The first time the player comes into contact with them are in the mission Cleaning the Hood, where CJ and Ryder perform a hit on a Crack Den.

There are four different models for crack dealers. One is an African American man in a sleeveless brown mesh shirt, black skullcap and a gold necklace, the second is a white man in a grey hooded sweatshirt. The third is a biker dressed up in a skullcap/helmet, white shirt, sleeveless gray leather vest and gray pants and boots, while the fourth one (never appearing on the streets) is Hispanic and wears black sunglasses, a sleeveless gray shirt, gray stonewashed jeans and black-white sneakers. The African American crack dealer appears more often in the traditional gang areas such as Ganton, whereas the white one tends to appear more often in the white and Hispanic areas, although both can be commonly seen throughout Los Santos. The third appears very rarely during normal gameplay but commonly spawns in the beginning of a new game, along with some San Fierro pedestrians in Los Santos. The player may see a biker pedestrian with a similar skin when riding a Freeway. However, the Freeway riding biker has a different voice, and upon inspecting the files, it comes out that the name of the biker drug dealer is bikdrug, while the normal Freeway riding bikers' is bikera. The Hispanic drug dealer only appears in the mission Ice Cold Killa and never on the streets.

Crack dealers strike a unique pose when not walking in which they cross their hands at waist level. They always carry a pistol or knife on rare occasion and will fire at CJ if he verbally provokes them or even draws a weapon while looking at them. If violence not directed at them occurs near them, they'll act like a regular pedestrian and either crouch with their hands over their heads, or run away. If they are killed, they drop a pistol and at least $2,000, which is a good source of money in the game.

Sometimes, random pedestrians will walk up to a crack dealer and a small transaction will take place, and the two may exchange a few words, although no drugs or money are seen.

If Carl approaches the crack dealer, the dealer will offer to sell him drugs. Carl is given the option to reply positively or negatively, but no matter which he has selected, he will always refuse to buy any drugs, though CJ's negative replies are much more verbally aggressive than the positive ones, and so are the dealer's replies. The dealer will more often than not start to open fire after receiving a reply in the negative.

It is possible that Carl Johnson was able to purchase drugs from crack dealers in the beta, but this ability was removed from the final version of the game.

At the beginning of the game, they spawn very rarely. However, after completing the mission Doberman, they appear much more frequently. They especially spawn in the Ganton area, which could be a hint as to the events of The Green Sabre, but even after all of the storyline missions are completed, or even 100% completion is attained, they will still spawn regularly in the ghettos of Los Santos.

Crack dealers are only supposed to appear in Los Santos. However, there is a way to make the two crack dealers appear in San Fierro, by replicating the Territory Glitch. They act the same as the two that are normally present. The skin they share is the biker drug dealer. 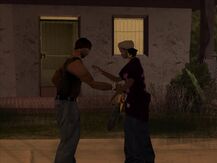 A crack dealer who is firing at CJ (player).

A close up of a crack dealer in Los Santos. 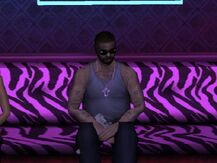 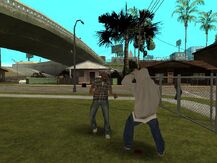 A crack dealer (in white sweatshirt) fighting a pedestrian at Grove Street. 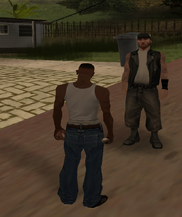 3rd crack dealer found during "Tagging Up Turf
Add a photo to this gallery
Retrieved from "https://gta.fandom.com/wiki/Crack_Dealers?oldid=1252998"
Community content is available under CC-BY-SA unless otherwise noted.