Wikipedia has an article on:
Cattle

The cows found in the game are mostly Holstein Cattle and Braunvieh cattle. Cows can be commonly seen grazing in pastures. These animals are passive, and will never attack the player, even when provoked. They use the same model and animations from Red Dead Redemption. 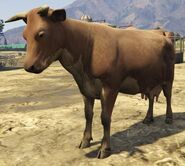