The location is a small cove on the eastern coast of San Andreas with a water-filled cave on the north side. It is located at the southern end of the San Chianski Mountain Range in Blaine County, just north of the county line. The Palmer-Taylor Power Station lies to the south, the RON Alternates Wind Farm to the west and Davis Quartz quarry to the north. There is no road access to the cove, however the terrain is not impassible from the nearest road, Senora Way.

A letter scrap and a spaceship part can be found in the cave, as well as a Grenade Launcher. 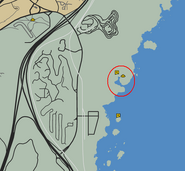 The seaplane event to unlock the Dodo.
Add a photo to this gallery

Retrieved from "https://gta.fandom.com/wiki/Coveted_Cove?oldid=1110858"
Community content is available under CC-BY-SA unless otherwise noted.