Coverup is a minor company that makes exterior paint for vehicles. The company is mentioned to be a sponsor of Los Santos Customs on a advertisement for their Lifeinvader page stating they will get a free spray paint job for stalking them.

The company also makes several appearances on racing liveries in Grand Theft Auto Online as a sponsor, most notable on the Coverup Paints livery for the Hotring Sabre.

Dispite not being seen, the company is mentioned to be based in Liberty City, Liberty City State, according to text on a spray can in The Diamond Casino Heist content update.

Coverup is a parody of Axalta, which was formerly a subsidiary of DuPont. 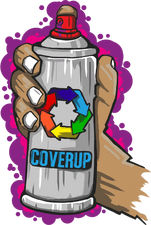 Graffiti of a Coverup spray can found at Benny's Original Motor Works.

A Coverup spray paint can.

The back of the spray can.

A Hotring Sabre with the Coverup Paints livery.

Worn Pintopaint can artwork from GTA IV. Which is likely a spin-off product of the Coverup brand.
Add a photo to this gallery

Retrieved from "https://gta.fandom.com/wiki/Coverup?oldid=1198855"
Community content is available under CC-BY-SA unless otherwise noted.