• ­Enter the Hauler or the Mobile Operations Center.

• ­Wait for your team to enter the Mobile Operations Center. (Driver)

• ­Wait for your team to attach the Mobile Operations Center. (Defenders)

• ­Deliver the Mobile Operations Center to the docks. (Driver)

"A Company Mobile Operations Center has been made. Get the Ops Center to safety while maintaining speed to avoid enemy missile lock."
―Description

Cover Blown is a Mobile Operations mission featured in Grand Theft Auto Online as part of the Gunrunning update.

The team starts in a storage area in Harmony, with a Hauler Custom and a fully-upgraded Mobile Operations Center provided. Agent 14 orders them to collect both and says that they were surveilling their enemy agents (possibly Merryweather Security) on days in the MOC and they do not want to be taken out by them. At the start, he informs that they were "detected" and the enemy will try to destroy the vehicle.

As soon as the team leaves Harmony far away, the enemy agents set up a lock-on missile on the vehicle and the driver has to maintain the vehicle' speed as high as possible, while the defenders have to make use of the MOC turrets. Agent 14 says that he will find a solution to disable the missile lock-on during the process.

The enemy agents will try to disrupt the team's vehicle with Mesas, Annihilators and occasionally P-996 LAZERs. They should not be much of a problem thanks to the MOC's cannons, as they are pretty effective against unarmored vehicles. The driver needs to move the truck constantly while Agent 14 progresses in the missile disability, otherwise the missile lock indicator bar will start to raise, which would lead to the imminent destruction of the MOC, but slowly decreases if the driver re-gains the minimum speed. Once he finds the way to disable the missile lock-on, both the speed and lock-on indicator bars dissappear from the screen, indicating that the vehicle is safe.

With the missiles blocked and the enemies gone, Agent 14 informs that they are no longer in danger and the team can leave the vehicle to Elysian Island, where allies are waiting next to two Hauler Customs. With the vehicles delivered, the mission ends. 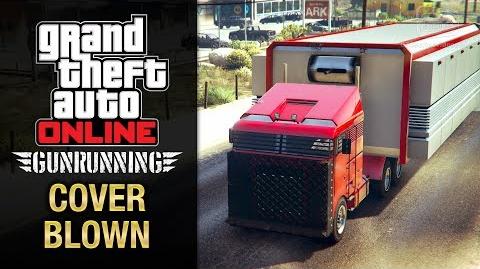 Retrieved from "https://gta.fandom.com/wiki/Cover_Blown?oldid=1191294"
Community content is available under CC-BY-SA unless otherwise noted.