The mission is activated by getting on a specific two-wheel motorbike or bicycle parked outside any of the outlets. A short time limit is given to deliver a bag of white powder to certain designated places in the whole city around the business by throwing packages through coronas (by viewing sideways, as is when the player aims for a drive-by shooting). Once all the packages have been delivered, Carl must return to the outlet to collect a commission. The amount of money paid relates to the amount of packages left and the time taken. After a few seconds some more targets are offered and Carl must deliver more packages in the same manner. The number of destinations and the distances between them increases over the four missions.

The motorbike/bicycle remains parked outside the store and the player may run the mission endlessly to earn extra cash.

Oddly enough, hopping onto a bike to trigger the job within sight of the police still results in a Wanted Level star being added.

The Roboi's Food Mart for courier missions is located in Commerce, Los Santos, near Pershing Square and the Los Santos Conference Center. The missions are activated by hopping onto the BMX. The business generates $2,000 per day after completing the missions. The missions are available from the beginning of the game.

A detailed explanation of the mission is on here.

The Hippy Shopper for the courier missions is located in Queens, San Fierro. The missions are activated by getting onto the Freeway. The business generates $2,000 per day after completing the missions. They become available after the mission The Green Sabre.

The Burger Shot for the courier missions is located in Redsands East. The missions are activated by getting onto the Faggio. The business generates $2,000 per day after completing the missions. The mission is technically available at the start of the game, but only with four stars, as Las Venturas is considered off-limits at that point;[1] Las Venturas unlocks after the mission Yay Ka-Boom-Boom. 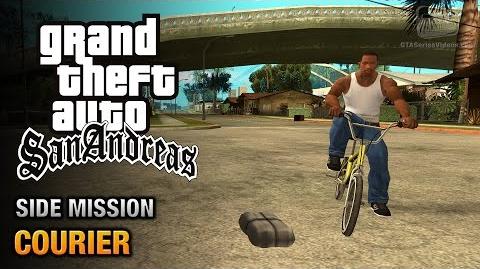