Chan: "They're not going to find any fake crap, Huang, because you're going to destroy it all for me."
Huang: "Yes, because I was bored and really wanted a favor to do for you."
Chan: "Man, I love having you in my life. I'm going to blog about you when I wake up tomorrow."
—Huang Lee does Chan Jaoming a favor

Counterfeit Gangster is a mission in Grand Theft Auto: Chinatown Wars given to protagonist Huang Lee by Chan Jaoming.

The FIB are investigating Chan Jaoming on suspicion of selling counterfeit "goods". They are searching for Jaoming's "goods" and will arrest him if they are proven to be counterfeit, so Jaoming wants Huang to dispose of his "goods".

The player needs to destroy all of Jaoming's goods scattered across the city before the FIB seizes them. The mission also has a time limit of 6 minutes and 15 seconds. The first lot of "goods" are located in the junkyard outside the garage, which the player can destroy by shooting them. Some Molotov Cocktails are located around the corner, which can be used to make the mission easier. Three lots of "goods" are located in crates at the docks. Get a vehicle and head to the docks, where the player can destroy the crates by running them over. Head to the next set of "goods", which are located in cars. Use the nearby Crane to lift the vehicles and dump them into the sea. This should not be too taxing as the Crane's controls are relatively simple (the joystick moves the crane around and the button picks the cars up). The final set of "goods" are also located in cars, which the player must again dump into the sea, this time using a Bulldozer. Using the Molotov Cocktails to destroy the cars can make the mission easier, as the explosion sometimes forces the cars into the sea. Once the last set of "goods" has been destroyed, the mission is complete.

"The FIB were set to raid Chan's businesses.

I had to race around, getting rid of anything that could have been incriminating.

NB: Chan's convinced that Zhou is ratting out the Triads." 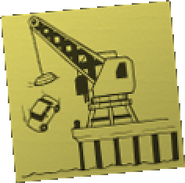 Counterfeit Gangster
Add a photo to this gallery 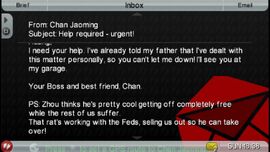 Chan sends a e-mail to Huang asking for help. 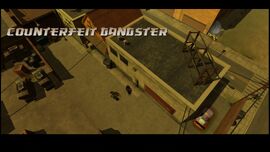 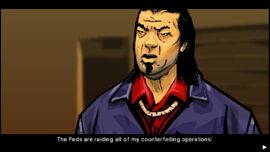 Chan says the feds are raiding all of his counterfeiting operations... 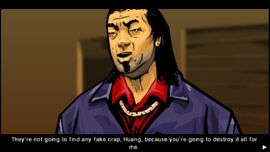 and tells Huang to destroy all of his counterfeit goods before they arrive. 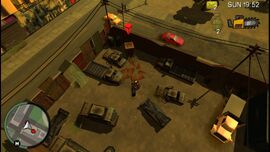 Destroying the 'goods' in the junkyard. 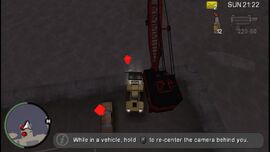 Dumping the cars in the sea using the Bulldozer. 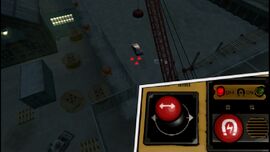 Dumping the cars in the sea using the crane 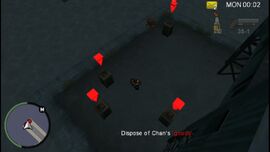 Finding the last set of "goods" in the docks. 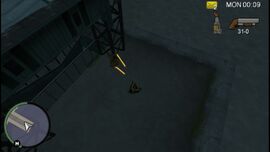 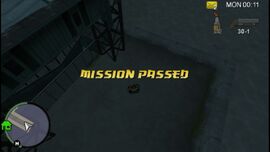 Retrieved from "https://gta.fandom.com/wiki/Counterfeit_Gangster?oldid=1187327"
Community content is available under CC-BY-SA unless otherwise noted.