View source
watch 02:46
The Quarry - The Loop
Do you like this video?
Play Sound
For the character, see Cougar.

Cougars are large, wild cats that can be found in forested and hilly areas throughout San Andreas, from the Vinewood Hills to Mount Chiliad; the western area of the Cougar's range can get quite close to Los Santos, as these animals can be sighted as close to the city as the undeveloped areas around the Kortz Center and Banham Canyon. When a Cougar is nearby, the first giveaway will often be its loud growl. If the area is populated, pedestrians will usually be seen running away and screaming. When attacking, a cougar will relentlessly charge at its victim, pounce on them, and kill them instantly with a throat bite. Its fast speed means that killing one before it pounces requires quick thinking and reflexes.

In the Hunting minigame, cougars will spawn frequently and they give off a red area circle on the map similar to Deer when Trevor uses the diaphragm, often tricking the player into walking right into an attack.

In Grand Theft Auto Online, the player can transform into a cougar after eating a peyote plant.

As in real life, cougars are not tamable and will run away if the player is driving a vehicle or firing a weapon. If the player encounters a cougar whilst on foot, the cougar will usually attack and kill the player without provocation. Cougars will not attack the player if they are on top of a vehicle.

If the player is using Trevor's special ability he can survive the cougar attack, thus leaving no damage to the player. It is possible, if the player responds quick enough, to kill or knock out a cougar by kicking it.[1] Police officers will not engage on cougars, even if considered hostile. Cougars can attack pedestrians, though uncommon.[2]

In Director Mode, if the player is playing as a cougar, pedestrians will run away, and gang members will act hostile.

A cougar in the standard edition. 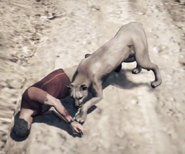 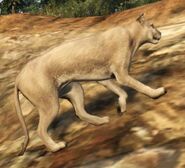 A profile of a cougar