watch 04:21
Wiki Targeted (Games)
Do you like this video?
Play Sound
This article contains insufficient information and is considered as a Stub. You can help the GTA Wiki by expanding it as much as you can.

The corona appears as a cylindrical element with a semi-transparent appearance, which emits a small amount of light at night. They appear in various sizes with different heights and diameters, and some include an additional icon in the center, such as a finishing-line flag, or a vehicle. Most appear vertical, while some air checkpoints may appear horizontal and appear as rings rather than a single cylinder. Typically, the corona is coloured yellow/gold, however various checkpoints, particularly in the HD Universe appear in blue, orange, red and green, too.

The purpose of the corona varies throughout the series however it mainly acts as a trigger point to activate missions, or as a checkpoint to reach. 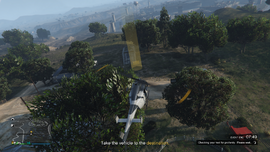 A tall, narrow yellow finish checkpoint in GTA Online.
Add a photo to this gallery
Retrieved from "https://gta.fandom.com/wiki/Corona?oldid=1266749"
Community content is available under CC-BY-SA unless otherwise noted.