The battle with the Police.

• ­Shoot down the chopper.

• ­Take your buddies back home.

Armando: "They must have got in our phones."
Papi: "Yo, fuck that, you fucking amateurs. I'm outta here, man."
―Armando and Papi have suspicions.

Corner Kids is a mission in The Ballad of Gay Tony, given to protagonist Luis Fernando Lopez by his drug-dealing friends Armando Torres and Henrique Bardas.

Luis heads out with his old friends to go to a drug deal they set up. Along the way, Luis argues with them about the time he spent in juvie and his employment by Gay Tony. Armando will then hand you an Automatic Shotgun and 15 grenades. When they reach the place, however, they learn that the police have bugged Armando's phone. The dealer runs off, but Luis, Armando, and Henrique face a wave of NOOSE officers. Luis takes down the officers, but a helicopter appears and drops off more NOOSE officers. Luis kills them and the trio runs off to escape, but the chopper comes back. Luis takes a Rocket Launcher from the back of a NOOSE Van and takes it down. Luis gets in a car with his friends and drives them back to their place in Northwood. Along the way, Armando and Henrique request Luis's help with their various drug deals, unlocking the Drug Wars.

Complete the mission in 7:50
Take less than 40% Damage
Kill 20 enemies via headshots
Have 55% Accuracy 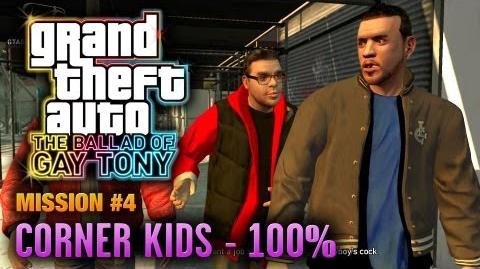 Retrieved from "https://gta.fandom.com/wiki/Corner_Kids?oldid=1288172"
Community content is available under CC-BY-SA unless otherwise noted.