Standard White - 100%
“The Classic and Blackfin were the mature cars you loved to ride. Now watch as they turn green and start leaking brake fluid at the sight of Invetero's youngest model. The D10 is a classic pedigree dressed to the nines, spray tanned and injected into everlasting youth. The age of the cougar is over. The real Coquette has finally arrived.”
— Legendary Motorsport description.

The Invetero Coquette D10 is a sports car featured in Grand Theft Auto Online as part of the Los Santos Summer Special update.

The Coquette D10 continues to serve the role of the original Coquette as the in-universe parody of the Chevrolet Corvette, being an almost exact replica of the 2020 Corvette C8. The headlight layout, however, takes some resemblance to the Corvette C7, with the outer small lights emulating the C7's LED stripes. Although the taillights have the shape reminiscent of the C8, the light setup itself is closer to the C7. The shape of the front bumper might have been inspired by modern Lamborghinis, such as the Lamborghini Aventador SVJ. Side vents might also have been inspired by the Lamborghini Aventador.

With the same body shape and featuring a sportier, aggressive styling, the Coquette D10 is distinctive by its front end, which is largely predominated by plastic separations for the grille and the intakes. Its headlights feature multiple smaller lights and lower amber strips, along with black portions on the housings. The manufacturer's emblem can be seen on the front.

The sides denote its aerodynamic profile, featuring plastic fins on the lower sides and the rear, where the rear vents are located. The greenhouse area features various plastic trim passing around the windows and part of the roof, along with colored mirrors. The roof features a slightly curved profile. The rear engine bay hatch has two plastic details besides the rear window, along with several vents on them.

The rear of the car features a set of four tail lights, with the rectangle reverse lights just above the red ones. A spoiler can be seen above the lights, as well as two rear vents below the same and the silver lettering in between, displaying the car's name. Towards the bottom, a black diffuser is seen, which houses the square-shaped exhausts. The underside is completely covered by a black plate.

Its interior is the same "Nero White" interior used in the Nero and its custom variant, albeit using the corresponding Invetero logo on the horn cap.

The Coquette D10 possesses far better performance than its previous iterations, having very good acceleration, top speed and handling for a Sports car. However, its performance does not rival that of cars at the top of the class, such as the Itali GTO and Pariah. Although it can slide when turning hard, it is manageable and can be corrected if it starts to spin out. Crash deformation is excellent for a high-performance sports car (though its bodywork does not deform) and can take a handful amount of punishments before it starts to fail. 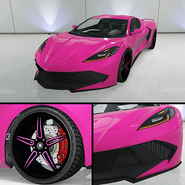 The Coquette D10 on Legendary Motorsport.

The Coquette D10 in the cinematic preview on Rockstar Games Social Club.