“If work is flying a fighter jet, your weekend ride better be pretty special to compete. The radical lines will make you regret even the slightest crash. But don't worry, the big engine and bad handling will ensure you're too dead to really care.”
— Legendary Motorsport description.

The Coquette Classic is an older version of the Coquette, which features a traditional design compared to both the GTA IV and GTA V iterations of the Coquette, yet it is still aerodynamic. The front keeps the pointy shape from the Coquette, albeit featuring a single front intake and a traditional chrome bumper. The car has dual rectangle headlamps protected by glass casings, which follows the curvature of the front section. The hood has a distinctive shape and featuring a small intake.

On the sides, the fenders are slightly curved on the front and bulky on the upper sides, with the vents visible on the same area as in its modern counterparts, while the rear fenders have more prominent curvatures and bulky forms. The greenhouse area is composed of a semi-squared windshield and the optional roof. The doors have chrome rear-view mirror wings and handlebars. Chrome skirts are also present at the bottom, below the doors.

The rear end follows the same pattern as the GTA V model, featuring the "COQUETTE" badging and the license plate on the center, and the tail lights on the sides, having three "half-circle" shaped lamps per side. The rear chrome bumper is identical to the front one, but split into two sections.

The vehicle comes in two models: a hardtop coupe and a topless roadster. The hardtop version has a curved rear section with split windows, while the topless version uses a dedicated trunk. The vehicle uses a primary color for the body and a secondary color for the stitching. Its wheels uses the same rim design as the "Revolver" muscle rims available in Los Santos Customs.

The Coquette Classic, just like the modern Coquette, has good top speed and acceleration, thanks to its large V8 engine. However, as the description from Legendary Motorsport implies, handling is poor. Understeer is a problem, and at times the car easily loses traction. When cornering at moderate to high speeds, the back end will almost invariably step out into to a slide. In skilled hands, this can be used to great effect.

The vehicle's durability is quite good, possibly owing to its steel body panels and sturdy construction. Crash deformation is good, and the wheels are difficult to jam, making it one of the most durable cars in terms of crash deformity (next to the Roosevelt) out of the Sports Classics as well as most other cars.

As of the After Hours update for Grand Theft Auto Online, the Coquette Classic received livery modifications, not available in story mode.

* Windows are not available if the "No Roof" modification is installed.

A red Coquette Classic shown in the official artwork.

The Coquette Classic as seen in the update trailer.

Michael with a Coquette Classic in a pre-release screenshot of the enhanced version of GTA V. 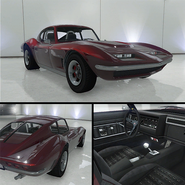 The Coquette Classic on Legendary Motorsport. 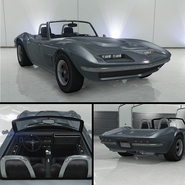 3 heavily modified variants of the Coquette Classic may appear in Vehicle Cargo source missions. Each variant has a unique license plate number, colour combination and different set of bodywork modifications.

Pre-modified variants of the Coquette Classic can be seen parked around Los Santos randomly. These variants will have defined color sets and custom bumpers, exhaust and wheels. Extras may be set randomly in both models, as in a normal Coquette Classic. These only spawn in single player. 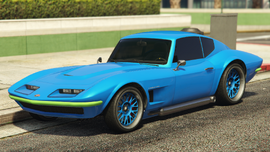 Like the randomly spawning modified Coquette Classics, two sets of Coquette Classics may spawn outside Los Santos Customs as well as other locations, pre-modified. These appear with the same modifications as the Pilot School Modded set. These again only spawn in single player.