"Ah, America in the 1950s. It's easy to spot the moment when Freudian psychosexual theory met car design and what a glorious pairing it was. This Coquette couldn't be more phallic if it was dragging a pair of hairy beach balls. It even smells like cigar smoke, conservative values, and semen. Get out your check book because this golden age of repression won't resurrect itself."
―Legendary Motorsport description.

The Coquette Blackfin is mostly based on the 1956-1957 Chevorlet Corvette (C1) in the frontal design and the 1961-1962 Chevorlet Corvette (C1) in the rear design. The car also has some influences from the Roadster Shop Corvette, notably the rims and area behind the seats. The name is a reference to the Mako Shark Corvette concept. The car's features slightly resemble the curves of a fish, which suits its name. It has the same tail lights as the Coquette Classic, except it doesn't have reverse lights. The car has unique stock wheels along with a unique engine sound.

The grille has a small resemblance to those found on many Austin-Healey sports cars.

Powered by its apparent 327cui 360hp V8 engine, the car has very good acceleration with a good top speed for a muscle car. Its handling is better than the Coquette Classic's, and better than several other Muscle cars. It doesn't have as many bouts of severe oversteer compared to other Muscles, and feels more consistent than them as a result. However, the car can still have its times of being hard to control, usually when attempting to take a corner and riding a curb, which regularly causes the car to lose control. It isn't as fast as similar Muscle cars, but makes up for that by being able to take the corners faster and with less chances for spin outs.

Because of its consistency, high speed carry, alongside very good acceleration, the Coquette BlackFin is a good choice for Muscle racing. It's especially good on tracks which lack long straights and have more corners than normal, but stands a fighting chance on most courses regardless.

*These modifications are only available if the No Roof modification has not been purchased. 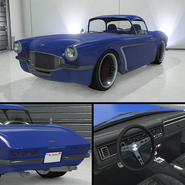 The Coquette BlackFin on Legendary Motorsport in the enhanced version.

The Coquette Blackfin on Rockstar Games Social Club.
Add a photo to this gallery

Retrieved from "https://gta.fandom.com/wiki/Coquette_BlackFin?oldid=1053970"
Community content is available under CC-BY-SA unless otherwise noted.