Standard White - 100%
“Something made in America that can still take on the Asian imports? Yes, the Coquette has withstood the test of time and, with this new model, Invetero blew through all their bailout money to create an end product that only the 1% can afford. Don't bite the hand that feeds you.”
— Legendary Motorsport description.

The Coquette closely resembles the Chevrolet Corvette C5, albeit with projector-style headlamps and slightly altered fascia. The front fascia is closely reminiscent of the facelifted 2002-2005 Honda/Acura NSX which shares the headlamp cluster design (the NSX sports a clear headlamp surround; the Coquette features a black surround), the radiator inlets, and the angular hood lines. The tail lights of the car are also based on that of the C5 Corvette, although the tail lamps overlap each other. The dual exhaust exits also overlap to mimic the tail light design. Unlike the Corvette, the side vents on the Coquette do not extend the entire length of the door; however they are finished with two silver accent strakes. The car also features a rod antenna mounted on the roof for improved radio reception.

The interior design is closely related to that of a Corvette with the extended leather package: the bucket sports seats feature two-tone leather upholstery in black and yellow with "Coquette" embroidery and matching leather door finishers and leather-wrapped gearstick. The car features a fully-carpeted parcel shelf with integrated speakers.

Coquettes spawn prominently in a single color, with the exception of a white and red one, where the red stripe is the secondary color. The car has five-split-spoke alloy rims wrapped by low-profile sport tires. The brakes are the same four very large, cross-drilled disc rotors found on the Infernus, Comet, and Turismo. Coquettes frequently have alarms.

The Coquette was first seen in the official trailer of Grand Theft Auto Online, closely resembling the Chevrolet Corvette C7. Some Lexus LFA and Jaguar F-Type influences are visible in the rear (with tail lamps slightly similar to the Benefactor Surano, another in-game vehicle).

Being a newer generation, the Coquette in Grand Theft Auto V and Grand Theft Auto Online shares a similar profile to that of the GTA IV iteration, but the changes are apparent: the front end has an identical intake layout, although the intakes are smaller and aligned with each other. The hood sports a central intake by default.

The fender vents on the sides have a different pattern, being triple vertical vents. The cabin's A-pillars are finished in black and the rear section features rear quarter windows and a separated rear window (opposed to the single rear window from the GTA IV iteration).

The rear end is slightly shorter and follows the same exhaust distribution, albeit closer to each other, and the rear diffuser is finished in black. A set of modern light stripes can be seen besides the silver lettering of the car's name, along with a third light just below the license plate.

The Coquette can be purchased with or without a roof. However it is possible to remove or add a roof at a mod shop. Color distribution was changed, where the primary color is applied to the body and the stitching on the seats, while the secondary color is applied to part of the hood and on the roof. It uses a set of wheels identical to the "S Racer" sport wheels, wrapped in low-profile tires.

The Coquette is a typical American sports car, in that it has a front-engine, rear wheel drive layout, a twin-cam Inline-4 under the hood and a 5-speed gearbox. It features a large singular engine crossbar to protect the engine bay from damage and deformation.

Like its real-life counterpart, the Chevrolet Corvette, it is also fairly lightweight which lends the car its nimble and quick nature. The Coquette reaches a top speed of 91 mph, an incredibly high top speed compared to other cars in the game. It has excellent braking and handling, even at high speeds. This car oversteers with ease, as a result of the monstrous power being sent to the rear wheels. This means it requires caution when turning into a corner when racing as oversteer and other forms of powerslide will slow down the car at the corner. Despite its drifty characteristic, the Coquette is an excellent choice for racing and the oversteer is very easy to control compared to two of its main rivals, the Banshee and the Super GT.

While the Coquette has a fairly solid construction and damage resistance, the front engine layout of the Coquette means it is specifically vulnerable to engine damage in high-speed front-end collisions; more so than mid-engine sports cars like the Turismo and Infernus.

The Coquette's inline-4 engine makes it a powerful vehicle in its own right. It has average acceleration, but a high top speed across Sports cars. Handling is the Coquette's strong suit, being very responsive and obedient of the driver's desires (potentially a bit too much so), meaning it is a great car to weave in and out of traffic with. Understeer is only an issue on tight corners, but otherwise a minor note. Braking power is great, and it can stop on short notice with ease. Crash deformation is poor, and only a small number of collisions are required to disable the car.

The car is once again powered by a double overhead camshaft inline-4, coupled to a 6-speed gearbox in a front engine, rear wheel drive configuration. This offers a large amount of powers to the rear wheels.

A Coquette with the white-and-red paint job. 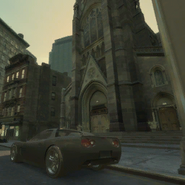 Shot of a beta GTA IV Coquette, with no decals on its rear. 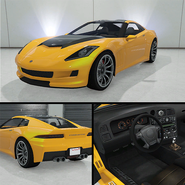 The Coquette on Legendary Motorsport. 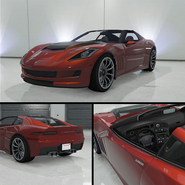 The Coquette (Topless) on Legendary Motorsport.

The Coquette on the updated Rockstar Games Social Club.

The Coquette in the cinematic preview on GTA V Rockstar Games Social Club.

The Coquette in the cinematic preview on GTA Online Rockstar Games Social Club.

The Coquette (Topless) on the updated Rockstar Games Social Club.