In-game time
“OK time to prove yourself. For reasons that don't concern you, I have an urgent need to thin out the police presence in Los Santos and I was thinking you could cause a diversion... pay some police stations a visit, cause some chaos, lead the cops on a merry dance out of town. I'll have grenades and an armored car waiting for you at the factory. Yes, that kind of chaos.”
— Description

Cops Capacity is a mission in Grand Theft Auto Online given by Lester Crest to the player. It is available up to 2 players.

Lester needs to lose his problems with the LSPD to make his heists and other operations easier. For this, Lester orders the team to destroy several law enforcement vehicles around the state. The team will gain a modded (bulletproof tires) yellow Dominator from the warehouse with suppliers. The first targets are two cop cars at a police station in western La Mesa. The next target is a Police Riot van in a Police parking lot near the Vespucci Canals. At this point, the team should have gained a three-star wanted level, the next targets are three Police bikes at the police station in Rockford Hills. Now, the team must head to the main entrance of the Bolingbroke Penitentiary to destroy a Prison Bus. After losing the cops, the team needs to go to Lester's safehouse in the Grand Senora Desert, where they will get their pay. 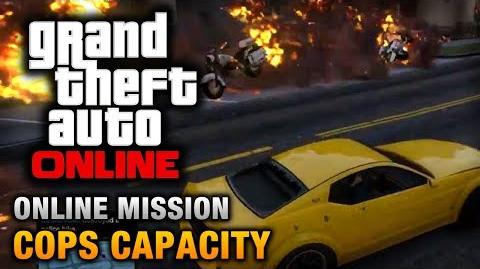