In-game time
“Anyway, I got a shipment of you know what coming in. This is going to put us - you and me - on the map big time. Everything should run smooth. I just need someone - someone I trust - to take care of things for me. Alright Toni, I'll talk to you later.”
— Salvatore Leone

Contra-Banned is a mission in Grand Theft Auto: Liberty City Stories given to protagonist Toni Cipriani by Salvatore Leone from his home in the Saint Mark's district of Portland, Liberty City.

Toni drops by Salvatore's home, walking in during an argument between Salvatore and Maria. Salvatore, whilst continuing to argue with Maria, informs Toni of a drug shipment that's about to come in to Liberty City. Salvatore asks Toni to drop by and make sure the drop goes off okay.

Toni takes three Leone Family members with him to Portland Harbor, where it is revealed the drug dealers are Colombian Cartel members, with Miguel among the group. Just before the trade, however, the LCPD and FBI ambush the deal, and Toni calls Miguel a "greaseball fuck" for setting him up. Toni receives a three-star wanted level.

After gunning down the Cartel dealers, including Miguel who actually survived, Toni takes the Cartel's Patriot full of drugs and must lose the police. Thereafter, Toni takes the Patriot to one of Salvatore's lock-ups in Saint Mark's, completing the mission.

The reward for completing the mission is $1,000. Provided the player has passed Hot Wheels, No Son of Mine, Blow Up 'Dolls', and Overdose of Trouble, completion of Contra-Banned should unlock the mission Salvatore's Salvation for Joseph Daniel O'Toole.

Joseph Daniel O'Toole: Hey Toni! It's JD. I hear it all over: you're headed for big things. I just hope you don't go forgetting about your old pal JD when you get to the top. Right? Hey, drop by some time okay buddy. 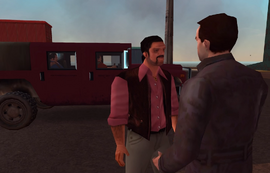 Toni Cipriani speaking to Miguel at the deal location. 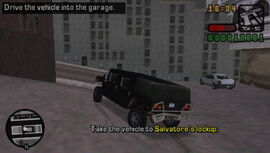 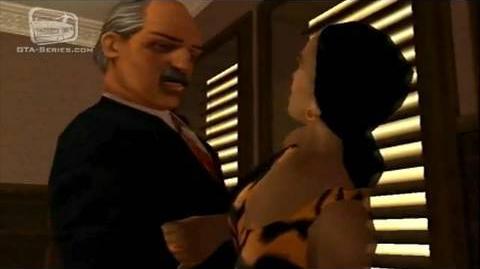 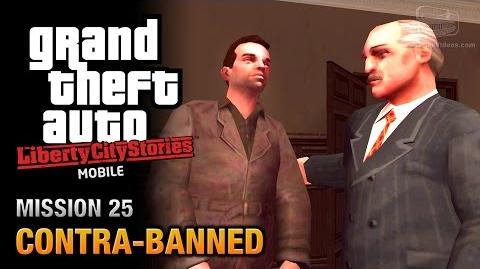