Standard White
“Are you a VIP in need of tasteful yet robust transport? Aspiring crimelord with an eye for flexible seating and storage space? Survivalist with thinly veiled paramilitary intentions? However deranged your aspirations, the Vapid Contender has got you covered.”
— Southern San Andreas Super Autos description.

“Own the streets.”
— Billboard advertisement.

Designed as a two-door vehicle, the Contender has styling very reminiscent of the 2005 Ford SVT Lightning Concept, most noticeably in the wheel arches, front bumper, grille shape and hood, while the bed and overall effect are reminiscent of the Ford Explorer Sport Trac. It has a Chevy-like, horizontally-split grille and headlights that are similar to the 2007 Chevrolet Avalanche. The Supercharged 5.7L V8 engine, is also similar to the Lightning concept but with a larger displacement V8 (the Lightning had a 5.4L V8).

The Contender is depicted as a pick-up truck with a somewhat sporty appearance, where the front bumper has rectangular mesh intakes, with the central one being almost twice the height compared to the side ones. A split grille can be seen on the upper area, along with black housings containing the circular lamps. The hood sports two thin ducts leading to the engine. The sides assume a bulky appearance on the lower sides and the wheel arches, with a separation between the cab and the truck bed. The cabin makes use of black trim around the windows, black rectangle mirror wings and tinted rear windows. The rear of the car assumes a more simplistic appearance, featuring red and amber lights on the outer edges, as well as a tailgate and two open slots at the bottom.

The Contender can spawn with several accessories:

Contenders only spawn in single colors, with the bottom portions and the grille surroundings always finished in silver.

The Contender assumes the design of a lifted four-door pick-up truck resembling the Second Generation Toyota Tundra Devolro Diablo, seen particularly in the frontal fascia and bullbar, the rear bed cap and rack, and the rear arches. It also takes some design cues from the Ford Raptor and 2010 4-door lifted Ford F-150. its cab design greatly resembles the 4th Generation Dodge Ram, primarily in the design of its doors.

The Contender is distinctive by the heavy-duty front bumper, fitted with a winch, brushguard and three fog lamps. The grille has a bolted-on surrounding and three horizontal separations, while the edges feature circular headlights with LED strips below and turn signals on the edges. The sides are characterized by the bolted-on arch extensions on the fenders, as well as the black stepsides and door handles. The cabin features black window trim, rear-view mirrors and roof marker lights. The roof itself features thin ridged details, while a third brake light is seen on the rear side. The rear end features large tail lights on the edges and a large tailgate on the center, along with a small bumper fitted with a license plate. The underside features large shock absorbers along with springs, and four kicker braces/impact struts running from each axle. As well as the two main axle diffs, the propshafts also run to two more central locking diffs. The front underside also sports a sump guard protecting the engine directly above it. The vehicle shares its interior with the majority of the SUVs, including its predecessor, the Sandking XL.

The Contender may spawn with a large bedcap with a roof-rack on top, although one can change it in Los Santos Customs. The vehicle is only available in a single color, and is set to black in instances where natural spawning occur (i.e. missions or Content Creator). Its stock wheels share the same rim design as those found on the Baller LE and its Long Wheel Base variant. The rims themselves can be repainted through Content Creator, although the permanent black finish gives it a darker tint/shade.

Despite having an apparent 5.7 liter supercharged V8 engine, the Contender only develops low amounts of power and therefore speeds are not too high, and can be equally matched by the Bobcat but the top speed is higher. On the bright side though, the Contender is impressively durable with collisions and gunfire. Handling is below average with the truck feeling heavy, and understeering around corners. Despite it being a pickup, it is not good off road, since the truck is only rear wheel drive, and the suspension is firm and does not have enough ground clearance.

The vehicle shares the engine sound from the Cavalcade and its FXT variant.

The truck has reasonable performance thanks to a powerful V8 engine powering all four wheels, giving it immediate acceleration and little loss of traction in a straight line, as well as great off-roading capabilities. However, it has a large oversteer when approaching corners too fast, resulting in a spin-out at high speeds. Along with being a heavy and durable vehicle, this vehicle has bullet resistant windows, strong axle, and sturdy frame.

The vehicle sports a 5.4L single-cam V8 engine laid longitudinally in a front-engine, all wheel drive (4x4) configuration. It is coupled to a 5-speed gearbox. It shares the same engine sound as most SUVs and pickup trucks, such as the Granger and the Bodhi.

A Contender with a front bullbar in Grand Theft Auto IV. 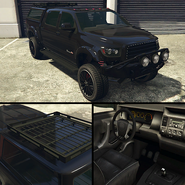 The Contender on the updated Rockstar Games Social Club.

The Contender in the cinematic preview on Rockstar Games Social Club. 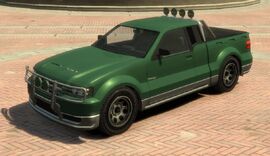 A Supercharged variant, driven by the McReary Mob. 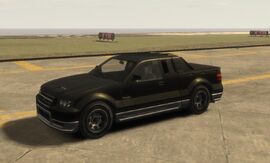 Bucky Sligo's unique Contender that can be obtained in Smackdown.