The Townhall Trinity Capture is unlocked at Rank 8, and is set around the estates and shops of Rockford Hills and a small section of Burton.

The bases are located in the car park of Los Santos Customs in Burton, and a back street off Portola Drive near the Vangelico jewel store.

The player's objective is to collect Security Cases located around the area. The player must successfully bring back the case to their base. Once completed, a point is awarded. While players fight to collect cases, other players should protect their base, or protect other cases from being stolen by opponents.

Vehicles around the map are mostly luxurious vehicles like the Alpha and Jester. BeeJay XLs and Bati 801s are also quite common. A Fire Truck can be found at the Rockford Hills Fire Station, and an Ambulance can be found opposite the Mount Zonah Medical Center.

Weapons are also quite common, and are generally high power and damageable weapons, weapons like the Micro SMG and Assault Rifle are common, whereas the Sniper Rifle and MG are rare. 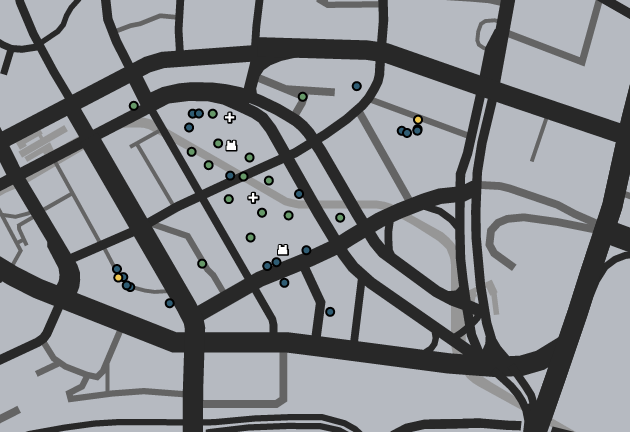 Retrieved from "https://gta.fandom.com/wiki/Contend:_Townhall_Trinity?oldid=961615"
Community content is available under CC-BY-SA unless otherwise noted.